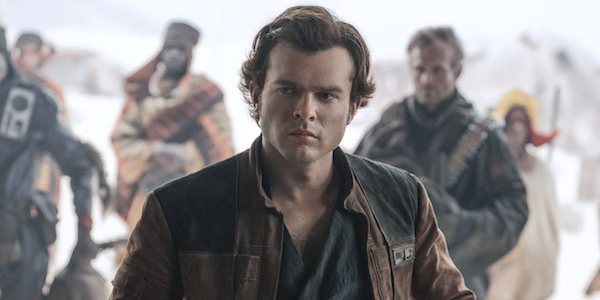 Ron Howard’s “Solo: A Star Wars Story” had more obstacles to avoid than the Millennium Falcon flying through an asteroid field. Here is the inevitable Han Solo prequel adventure, sans Harrison Ford, with promising newcomer Alden Ehrenreich (the scene stealer of “Hail Caesar!”) taking over the role of the “scruffy lookin’ nerf herder,” scoundrel/pilot. In addition to the enormous pressure of a new actor in an iconic role, this “Star Wars” stand-alone entry arrives after nearly a year of bad press, with reports of replaced directors, an altered vision, re-shoots and other unfavorable bits of gossip. All the toxic pre-release press becomes a non-issue after the first five minutes of this charming, thrilling adventure.

The expected story elements are in place- I’ll be vague, as always, and avoid spoiling any surprises. We meet Solo as he escapes a horrible upbringing, meets Chewbacca, connects with an unruly character (well played by Woody Harrelson) and begins to understand his place in the ongoing rebellion.

This latest “Star Wars Story” likely won’t inspire anyone to declare it “the best since ‘Empire Strikes Back,'” (the highest praise that seemingly everyone bestows on each new “Star Wars” installment). Still, “Solo: A Star Wars Story” is great fun. In addition to being as frequently exciting and funny as one would hope, it makes 135 minutes feel like a jump through light speed.

Ehrenreich’s take on Solo ranks somewhere between very good and a placeholder for a young Harrison Ford performance we’ll never see. I mean this as a high compliment: Like Brandon Routh’s work in “Superman Returns,” Ehrenreich’s physical and vocal similarity creates continuity with the legendary performer he’s standing in for, but he still makes the role his own. Donald Glover finds just the right notes of unflappable cool as Lando Calrissian and Paul Bettany, playing the key villain, hasn’t been this good in years.

The DNA of the western genre is so deeply imbedded in this franchise and it’s a pleasure to see how fully it comes across here. Han and Chewie aren’t quite Butch and Sundance but they’re on their way. Harrelson’s work is so in tune with cowboy posturing, his performance could work just as well in a conventional western. The first big heist at the end of the first act even plays like a gravity defying take on a train robbery. Emilia Clarke’s Qi’ra (and her relationship with Bettany’s Dryden) fittingly has a plot arch out of an old fashioned gangster movie.

Addressing the way Chewbacca’s growls are understood by Solo wasn’t the smartest idea; if anything, having that remain unexplained for so long was one of the best running gags in the franchise. As entertaining as the performances are, I suspect there’s a far longer cut that gives the characters more time to develop. While Chewbacca and the scene stealing new L3 are quite endearing, Jon Favreau’s vocals, applied to a CGI pilot with multi-appendages, is thoroughly grating.

Some of the story twists are easy to get ahead of but there are some nice surprises in the third act. In fact, a key character reveal may be the gutsiest thing the new “Star Wars” movies have done so far.

“Solo: A Star Wars Story”” drops the self righteous solemnity of “Rogue One” and is much lighter on its feet than the recent episodes 7-8. Grumpy “Star Wars” fans will find lots to complain about (namely the abundance of humor).

The ongoing complaint I hear the most from die-hard “Star Wars” fans (a group I consider myself a member of) is that the new films are too different, too removed and shallow in comparison to the original 1977-1983 trilogy. As a child of the 80’s who slept in “Return of the Jedi” bed sheets, subscribed to Bantha Tracks (the Star Wars newsletter) and had a framed Darth Vader autograph hung next to his bunk bed, I get it, I really do. Poe Dameron is no Han Solo, Midichlorians derailed too much of the established lore and the Special Edition changes undermined what worked the first time. Yes, there have been more than a few disturbances in The Force. The new movies have peaks and valleys but I remain a devoted fan and “Solo: A Star Wars Story” is among the reasons why. This is the most fun I’ve had at a “Star Wars” movie since the eighties.

'Solo: A Star Wars Story' has no comments