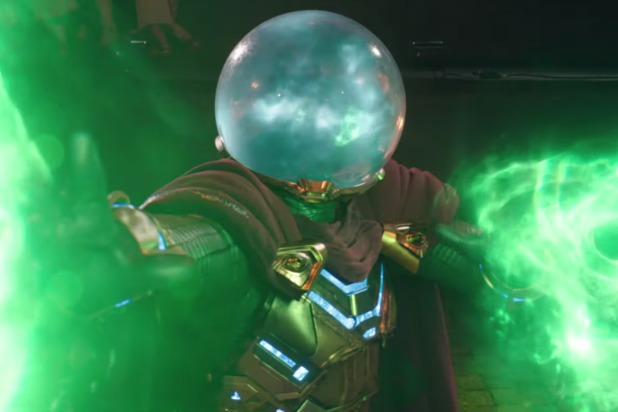 Peter Parker (played by Tom Holland) is off on a summer vacation to Europe and intends to leave his Spider-Man suit and superheroes duty behind. Parker’s intentions of finally telling MJ (played by Zendaya) how he feels about her are put on hold when Nick Fury (played by the reliably great Samuel L. Jackson) turns up and informs Parker that his abilities are needed. A new ally arrives in the form of Mysterio (played by Jake Gyllenhaal), a figure from the “multi-verse” who offers Parker some needed perspective on the struggles of being a superhero and maintaining a double life.

“Spider-Man: Far From Home” is breezy and frivolous for the first half, never amounting to much more than an average high school class trip farce.  As a comedy, this is weak stuff. An intended highlight of casting Martin Starr and JB Smoove as teacher chaperones bombs, as their jokes never land.. There’s also a bit involving a “this-isn’t-what-it-looks-like” misunderstanding that is as creaky and eye-rolling as the old “it was only a dream” cliché. For most of the way, the latest Spidey adventure appears to be the least in the series, especially in light of the startlingly inventive “Spider-Man: Into the Spider-Verse” from last year.

What saves the movie and makes it meaningful is the big second act reveal, as obvious as it is (the introduction of a major new character in the early going brings up a lot of unanswered questions). Once the “bad guy” is established, the whole thing finally settles into a groove it sustains until the end.

The central villain presents a timely notion, that visual deception on a mass scale is the greatest way to control and take over the masses. In light of recent fears over “deep fakes” and the digital manipulation of truth, the antagonist has a method to his madness that has a ring of plausibility (more so than, say, a disgruntled contractor who wreaks havoc by dressing up as a vulture).

Holland is growing on me in this role and he’s terrific here. Less so is Zendaya as MJ- I like the concept of her character much more than the low-watt manner she plays it. Yet, the love story works in spite of her. Unlike the prior film, I found myself finally rooting for this couple to generate some heat (though this is of the peachy-keen puppy love variety, barely enough to light a single match).

There are moments that are quite awesome, particularly the surreal bits where Parker experiences digitized hallucinations. The Marvel movies are action packed, though few of them have genuinely great set pieces (there’s more chaos than coherency in any of the big fight/smash-ups). Yet, there are bits here that excite and take great advantage of the film’s 3-D option.

Aside from Gyllenhaal, the rest of the adults have little to do here. Jackson has a few nice one-liners but is getting into the “I’m-getting-too-old-for-this” phase of playing Nick Fury. Why hasn’t Marvel given him a proper vehicle yet? Jackson can carry a movie (any movie) and is a far more compelling and accomplished actor than most in the Avengers ensemble. Colby Smulders has so little to do here and invests so little of herself in her scenes, she could be digitally erased from the movie and no one would notice.

At its best, this is a slight improvement over “Spider-Man: Homecoming,” though still minor league compared to the “The Amazing Spider-Man” and the first two Sam Raimi web slinger adaptations from ’02-’04. There is the expected stamp of Marvel quality here and hints of depth, but really, this is kids stuff. The character of Peter Parker and his entire franchise has seen richer, smarter days.

I’ll always remember this as the one where Gyllenhaal wore a fish bowl on his head for almost the entire movie.

'Spider-Man: Far From Home' has no comments