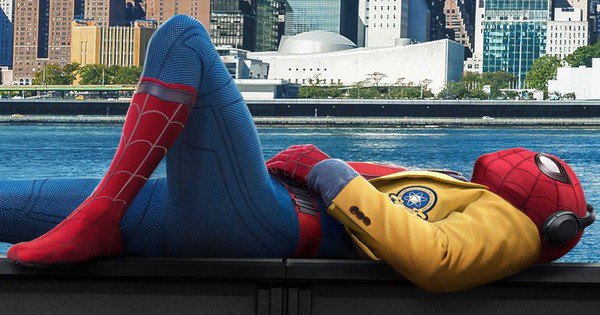 “Spider-Man: Homecoming” begins awkwardly, as white collar bureaucrats undermine a group of blue collar workers who are cleaning post- super hero battle rubble. We meet Michael Keaton’s central villain, who takes advantage of the position by stealing alien technology. What follows is “a film by Peter Parker,” showing the young Parker/Spider-Man meeting Tony Stark (played by an underused Robert Downey Jr.); this scene isn’t as funny as it thinks it is. Despite the efforts of six screenwriters, the moments that work are surrounded by creaky cliches, overworked formula and overly smarmy characters.

One of the smarter things about “Spider-Man: Homecoming” is that it understands how smug and self righteous The Avengers can come across. The teenage Parker (played by Tom Holland) is dismissed by the narcissistic Stark and (in the film’s best running gag) suffers through Captain America’s cornball informational videos. The Avengers may have saved the world but, when you think about it, they’re kind of insufferable. We can root for them as filmgoers but, in real life, would you really want to get stuck in an elevator with Bruce Banner or listen to Hawkeye and Thor drone on about themselves?

It seemed like Parker’s youthful journey would provide the antidote to the lesser, overly serious and exposition-crammed Marvel installments. Unfortunately, the film is carried by a young actor whose inexperience mirrors the trying-too-hard actions of his onscreen character.

Holland’s Parker was great fun in “Captain America: Civil War,” where he was initially presented in small doses. Here, as the anchor for an entire film, the actor and character are grating. It’s a shrill, overly-caffeinated performance. To say the least, the warmth, depth and easygoing charisma of both Tobey Maguire and Andrew Garfield are greatly missed.

While Garfield and Maguire were in their late 20’s when they played Peter Parker, Holland is 21 years old, playing a 15-year old but acting more like an 11-year old. The high school setting makes sense for the target audience but doesn’t add as much to the film as it should. Just as the teenage puppy love and science class shenanigans get in the way of Parker’s greater purpose, these scenes also weigh down the movie.

There are enough surprise cameos, fan boy in-jokes and references to the Stan Lee/ Steve Ditka- created source material to delight Marvel movie maniacs and kids, who will likely eat this up. I’m not taking sides in the DC Comics versus Marvel Studios “who makes better movies” argument. I love a great comic book movie, but this one earns only a passing C-grade from me.

“Spider-Man Homecoming” is as overlong, crammed with too many supporting characters and under-developed subplots as “Captain America: Civil War” but never as hilarious or exciting as “Ant-Man” or either “Guardians of the Galaxy.”

Most of the jokes are limp, the scenes of Parker’s home life (with Marisa Tomei playing his guardian) have no kick and the Washington Monument set piece is the only action sequence that truly thrills. Some of the CGI has an unfinished, low caliber video game quality to it, though the majority of the special effects are solid.

Keaton’s excellent performance as The Vulture is the best thing in the movie. Yet even Keaton’s clever turn is shortchanged by a final confrontation more interested in busy action and ample CGI than character building. There is a genuine surprise in the film’s third act I didn’t see coming; it gives the film a major shot in the arm but can’t salvage it.

From the very start, with its references to the Marvel movie universe, “Star Wars” and an especially shameless plug for Star Wars Lego sets, this feels like the shiny product it is. Sam Raimi’s 2002-2007 “Spider-Man” trilogy is disrespected for its botched third installment but offered a great deal of emotion, style and inventive filmmaking. None of those things are present in this, one of the least essential of the Marvel movies. Only Raimi’s “Spider-Man 3” resulted in a studio-mandated, let’s-please-every-single-audience-demographic Franken-movie. Otherwise, his first two films, and Marc Webb’s excellent “The Amazing Spider-Man,” nailed this character. “Spider-Man: Homecoming” portrays a 15-year old Parker trying to score with a hot girl, attend the homecoming dance and earn a place in The Avengers. It’s all minor-league stuff and so is this movie.

'Spider-Man: Homecoming' has no comments