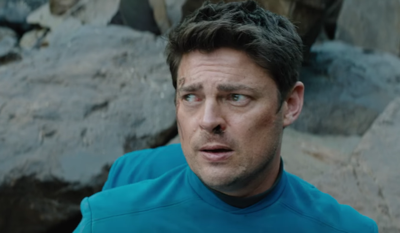 The legacy of Star Trek celebrates its 50th anniversary this year. Gene Roddenberry crafted a universe that brought out the best in humanity. The Enterprise and its crew have been boldly going where no man has gone before and shows no signs of coming out of warp speed. This year, the third film in the newly rebooted Trek series has set a course for another adventure to honor its 50th year being a strong influence on the sci-fi genre and the world with the new movie, “Star Trek Beyond.”

In 2009, J.J. Abrams reinvigorated the Star Trek series with a reboot that not only honored the originals that came before it, but also set a new course with a new cast playing the classic crew that was both familiar yet refreshing. J.J. Abrams directed the first two Trek’s in the new series, but has handed over the directorial reigns for the third film to Fast & Furious movie series alum, Justin Lin. Justin Lin was under pressure to deliver on a third film celebrating a TV and cinematic milestone. Did he deliver?

“Star Trek Beyond” begins with our intrepid crew three years into their five year mission exploring strange new worlds and seeking out new life and new civilizations. The monotony of being stuck on the Enterprise for so long has taken a toll on her Captain and her crew. Kirk also has been in deep contemplation about his place within the Federation. Kirk is now older than his father when he gave his life in service of the Federation for his crew. Captain James T. Kirk has decided that because of the mounting pressures, he and the crew deserve a much needed furlough. The crew heads to the latest Starfleet outpost, Yorktown, in search of relaxation and some downtime. No sooner do they arrive that a mysterious distress call is received from an escape pod from a nearby nebula with an alien being claiming that her ship has been stranded and in desperate need of rescue. Captain Kirk, without hesitation, answers the call and volunteers himself, his crew, and his ship to lend assistance. Unbeknownst to Kirk a deeper, more nefarious work is at play that could cost Kirk his life, the life of his crew, and his monumental Starship.

“Star Trek Beyond” is a stunning love letter to Star Trek and her legacy. “Beyond” feels like an extended episode of the original series and that’s a good thing. “Beyond” is thoroughly cinematic in look, but episodic in tone and story. Co-written by Simon Pegg, who also plays Scotty, really does have a feel for these characters and how they relate to one another. This third film is lighter in tone and employs a villain that feels uprooted from the 1960’s series. Idris Elba plays Krall, a being that has amassed an army and an impressive array of spaceships and weaponry seeking justice and vengeance for himself and his followers. Sadly, the villain and his minions of this adventure are this Trek’s biggest issue. While Krall is compelling and frightening to behold his existence and his motives are quite unclear. Even when his motives for his actions come into soft focus, the existence of himself and his followers even being alive for so long are still a bit baffling. What makes up for this issue is the rousing ridiculously fantastic finale which sees the crew working together to rescue Yorktown from the clutches of Krall.
“Star Trek Beyond” works and is thoroughly entertaining because of the the chemistry of the Enterprise’s crew. Chris Pine as Kirk to Zachary Quinto as Spock and the rest of the actors playing the iconic crew shine brightest here with wonderfully entertaining character beats.

The introduction of a new character that fights alongside our crew, Jaylah (Sofia Boutella), is also a welcome addition to the cast. She finds her place among the cast quite nicely. These characters and their relationships help us overlook the story’s shortcomings. 50 years of an exuberant sci-fi life on the small and big screen is hard to come by in Hollywood. Star Trek has defied the odds and has transcended into our consciousness. “Beyond” marks a fitting tribute of what has come before and what lies ahead for 50 more years of this franchise. “Beyond” is a celebration of what Star Trek and Gene Roddenberry’s ideals of a hopeful future would look like. Let’s hope with the fourth film of the new franchise already announced that the filmmakers keep boldly going where no one has gone before and keep reaching “Beyond” our expectations.

'Star Trek Beyond' has no comments