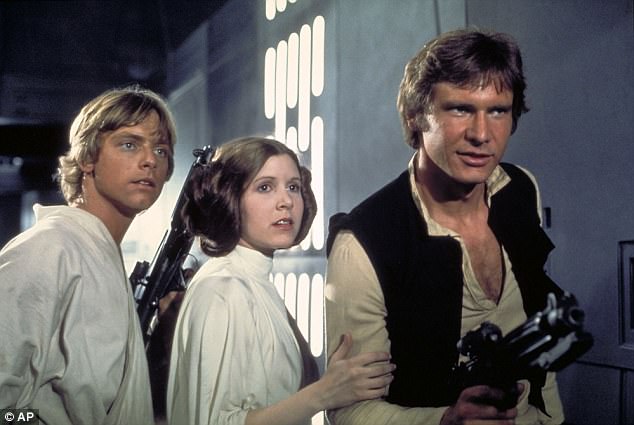 What were movies like before George Lucas’ “Star Wars” opened forty years ago on May 25th, 1977? On the one hand, I know the answer to this question. In the months before “Star Wars,” filmgoers had to sift through junk like “Airport ’77” and “Billy Jack Goes to Washington,” as well as eventual summer movies like “Herbie Goes to Monte Carlo.” Yet, I don’t really know what life was like before “Star Wars,” as I born in February of ’77 and wasn’t conscious of life before The Force forever changed pop culture. However, I can vouch for the effect Lucas and his “Galaxy Far, Far Away” had on my life.

The first, oldest memory I have is of seeing “Star Wars” in a movie theater. I recall the theater being loaded with neon lighting, sitting on my Dad’s lap and some of the images on the big screen. R2D2 being blasted and abducted by the Jawas and the light saber battle between Obi-Wan Kenobi and Darth Vader burned deeply into my memory. So did this very early thought: whatever this is, I want more of it.

There’s no way my recollection is from 1977. My Dad must have taken me to see it when it was re-released in subsequent years. Or, also likely, in one of those theaters where it opened in 1977 and just never left. Arriving in the days before the VCR and just before cable TV was a way of life, “Star Wars” opened near the end of an era when movies played in theaters for years and could be found traveling around the country like a transient entertainer.

I was one of those 80’s kids who had a chest full of “Star Wars” action figures, subscribed to the Bantha Tracks Star Wars Fan Club, proudly sported my “Revenge of the Jedi” patch before the title was recalled and happily created made-up, further installments of Lucas’ saga with my buddy John at the end of my culta-sac. I later became a film student who endured the wrath of a teacher who passionately declared that “Star Wars,” both the film itself and the phenomenon is created, essentially destroyed cinema and ceased the Golden Age of 1970’s Cinema.

To address the first accusation: Yes, “Star Wars” was greatly influential, particularly in the way it was so fast paced, with something eventful happening in every scene (even in the slow ones). The use of old fashioned “wipes” for scene transitions, as well as imagery out of David Lean (as well as the casting of Lean regular Sir Alec Guinness as Kenobi) and a story that made an amalgam of classic Hero’s Journey sources made “Star Wars” a grand throwback. There are moments scattered throughout containing pieces of Arthurian legend, Greek mythology, “Flash Gordon,” Saturday morning serials, classic space operas and even “Lawrence of Arabia.” Despite the sideburns and poofy hair, “Star Wars” isn’t a ’70’s relic but a synergy of pre-existing concepts with an original mythos. It was also a low budget independent film to boot. Despite the grandeur of its scope and story, Lucas’ film isn’t pretentious or bombastic. Like “American Graffiti,” this is another self contained, personal film for Lucas.

As for the film school cliché that “Star Wars” killed the Golden Age of 1970’s Cinema, this is an easy one to combat.

The monumental success of Lucas’ film resulted in the gradual ubiquity of “Star Wars” merchandise and guaranteed its filmmaker a lifetime of financial and creative independence. Rival film studios released “Star Trek: The Motion Picture,” “The Black Hole” and “Moonraker,” while many more distributed rushed, cheap “Star Wars” knockoffs. “Star Wars” made the appeal of family-friendly event films even greater and quickened the pace of summer films (and most outer space-set sci-fi films). It did not, however, crush the era of risk-taking, story-driven 70’s filmmaker dominance.

“Star Wars” was not the reason the decade of Peter Bogdanovich’s “The Last Picture Show,” Martin Scorsese’s “Mean Streets,” Francis Ford Coppola’s “The Godfather,” Bernardo Bertolucci’s “Last Tango in Paris,” Michael Cimino’s “The Deer Hunter,” John Boorman’s “Deliverance,” Sidney Lumet’s “Dog Day Afternoon” went away. You have the filmmakers themselves to blame, as most of the great 70’s filmmaker pioneers followed up their success with bloated, self indulgent and financially irresponsible flops.

Bogdanovich’s “At Long Last Love,” Lumet’s “The Wiz,” Coppola’s “One From the Heart,” Boorman’s “Exorcist II: The Heretic” and especially Cimino’s “Heaven’s Gate” were the chief culprits. Every one of these great filmmakers eventually came back but the damage had been done: their reliable visions and filmmaking prowess were undermined by the massive (and, in most cases, truly awful) flops they created. Studios understandably looked in the direction of the young Lucas, as well as the youth-oriented MTV and the consistent up-and comer extraordinaire Steven Spielberg (who somehow leap-frogged over his own 70’s mega-flop “1941”). The vital filmmaking voices of the following decade were mostly from independent directors (like John Sayles, David Lynch and Spike Lee). Meanwhile, “Star Wars” was everywhere, even before its first “Holiday Special,” sequel, TV movie, cartoon spin-off, prequel or belated sequel turned up.

“Star Wars” was far from the only outstanding film of 1977, the year that also gave us “Eraserhead,” “3 Women” “Sorcerer,” Saturday Night Fever,” “Close Encounters of the Third Kind,” “Looking For Mr. Goodbar” and “Annie Hall.” I’d even make the Meany Fanboy argument that “Close Encounters of the Third Kind” is the better movie, as is Lucas’ “American Graffiti.” Still, as much as the unquestionable greatness of those works haven’t faded, I can’t get a “Close Encounters” t-shirt anywhere, nor an “American Graffiti” lunchbox or start a casual conversation anywhere in the world about whether Han or Greedo shot first. “Star Wars” is everywhere. Like any truly groundbreaking work, its appeal exists outside of its status as a successful movie. You could have a conversation with someone living in Iowa, Russia, Africa, Japan, Australia or the North Pole about The Force, Jabba the Hut or what it means to be a “scruffy lookin’ nerf herder.”

There is a scrappy charm to Lucas’ first crack at telling this saga. You’ll notice I haven’t re-capped the plot, nor opened my focus beyond the original (which, yes fanboys, is called “Star Wars Episode IV: A New Hope,” but really, in the 80’s, we just called it “Star Wars.” So there). What I should mention is that John William’s magnificent score is every bit an essential ingredient as Lucas’ boundless imagination or the wonderful Industrial Light and Magic visual effects. Mark Hamill’s Luke Skywalker is both boyish and soulful, but the film belongs to the late Sir Alec Guiness and a green but commanding Harrison Ford as Han Solo.

Its easy to forget how funny the one-liners are, how layered the narrative is and how there are some powerful moments as well. The fate of Skywalker’s Aunt and Uncle, as well as that look Kenobi gives Luke right before Vader slices through him, are devastating.

There’s also that shot of Skywalker, gazing at not one but two suns setting in the distance while Williams’ score carefully tells us about his longing and need to be a part of something greater. It is one of the great moments in cinema. The word “thrilling” was created to describe movies like “Star Wars.”

'Star Wars' has no comments