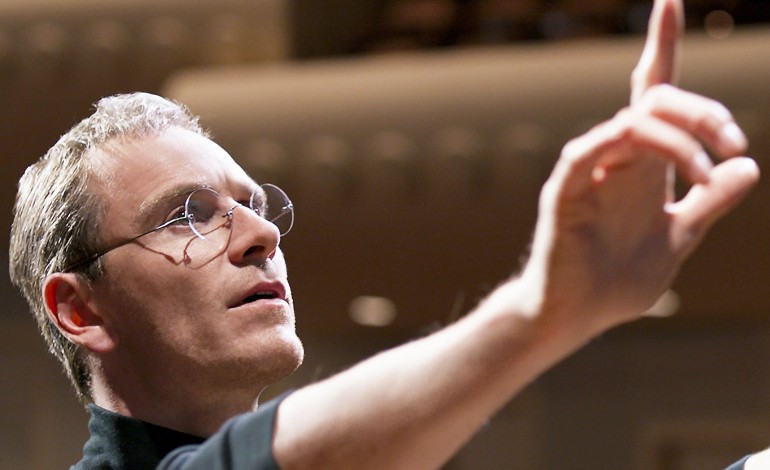 Nearly every movie plays like an advertisement for Apple. I’ve noticed this for years and suspect moviegoers have as well: in about 85% of all movies, there’s a scene where a character turns on their laptop and the Apple symbol is always in plain view. The cliché used to be that, when a character needed to do research, they would rush to the library and scroll through tell-tale reels of microfilm. Now, when scenes of a character’s uncertainty arise, it’s always a quick Google search on an Apple computer. Here we have a film about Steve Jobs, the founder of Apple computers and, not unreasonably, a man considered one of the most important technical innovators of the late 20th century. Whether you’re already in love with Jobs or would prefer to be watching The Bill Gates Story, there’s no denying that “Steve Jobs” feels like a glossy advertisement for itself.

Michael Fassbender stars as Jobs, who we see frantically putting together the final touches on his product before a stage presentation. His long suffering assistant (Kate Winslet) forces Jobs to address his long neglected daughter before he takes to the stage. Meanwhile, Jobs’s friend and co-collaborator (Seth Rogen) begs that he recognize the efforts of those working in his company, though Jobs refuses to take the focus off of his latest technological advancement.

The screenplay is by Aaron Sorkin, who gives the film a three-act structure, broken up into sequences of Jobs backstage, awaiting to unveil the Mackintosh in 1984, the NeXT in 1988 and the iMac in 1998. Sorkin, whose screenplay for “A Few Good Men” is among the textbook examples of how to adapt a stage play for the big screen, struggles to translate his unusual approach cinematically. Clearly, this would have worked well on stage, with its blatantly theatrical, dialogue-heavy approach. The many long scenes of actors walking around long hallways, yelling at one another, makes this more like “Birdman 2” than a fitting ode/dissection of Jobs. Sorkin’s screenplay has some witty banter (I particularly liked the references to Patty Hearst and “The Jetsons”) but his overly stagey format comes off like a clumsy adaptation of a Broadway play.

Fassbender is so electric as Jobs, I almost overlooked how wrong he is for the role. While always a commanding actor, Fassbender distractingly looks nothing at all like the world famous man he’s playing. Winslet mostly overcomes a wobbly accent and gives a sturdy performance, while Rogen and especially Jeff Daniels are rock solid in supporting turns. The scenes of Jobs dealing with his daughter are the best the film has to offer, though they play like formulaic melodrama.

Director Danny Boyle often has Fassbender framed against structures that resembles the inside of computer grids and has imagery projected against blank spaces to give visual zip to the many scenes of actors droning on. The moments of visual zip help but it only illustrate how a more straightforward approach could have salvaged this. I’m not a fan of the lousy 2013 “Jobs,” in which Ashton Kutcher played the title role. Yet, that film covered more ground, told the story in chronological order and had a leading man who, while out of his league as an actor, couldn’t have looked more like the person he was playing. “Steve Jobs,” on the other hand, is best for those already familiar with the subject matter, as this limited biopic only offers on-the-nose observations about a complex figure.

Clearly, it’s too early for a definitive film about Jobs. Allow me to pitch the ideal man for an authoritative movie on Steve Jobs: Ridley Scott. After all, he directed the famous Apple 1984 ad that launched the Mackintosh. Surely he knows not to make Job’s life into a pompous, mannered, filmed stage play.

'Steve Jobs' has no comments