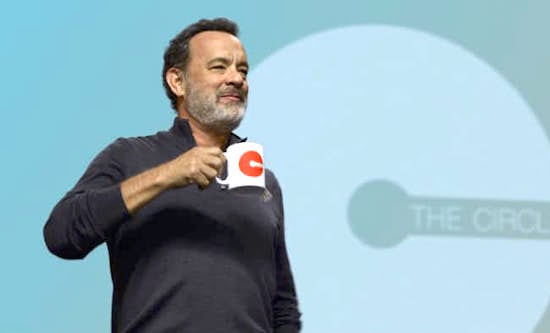 The issue of personal privacy in the world of the internet and social media is a subject that gets some attention. Questions of whether the government should or should not regulate the internet in the interest of the public trust is hotly debated on both sides of the argument. This issue is no stranger to cinema. The earliest film I can recall is “War Games” starring Matthew Broderick. This film dealt with the early days of a connected society in a new electronic age and its repercussions on a world stage. These ideas have matured over the decades, but the theme is a constant. In a connected world can privacy and anonymity be kept from those that you’d rather not share your information? In the new film, “The Circle”, Hollywood sets its sights on silicon valley and the ever evolving ever connected world and the new order that it’s ushering in.

Mae Holland (Emma Watson), an unassuming young woman takes a job at an influential internet tech company known as The Circle. Mae quickly begins making a name for herself and climbing the corporate ladder as she is more than willing to expose herself for the good of the company and have her every move monitored 24/7. Mae soon finds herself standing amongst tech giants and co-founders of The Circle, Eamon Bailey (Tom Hanks) and Tom Stenton (Patton Oswalt). Mae is recruited for a new technological endeavor that will call into question her ethics, the right to privacy, and individual freedom that could have dire consequences for the world at large.

“The Circle” tries its level best to be a compelling film that asks questions of its audience about the subject of privacy and transparency. Unfortunately, what could have been a film that asked deeper questions and given deeper thoughts to these pressing new societal norms, instead only scratches the surface of these questions. Transparent is a word thrown around in this movie and it’s quite apropos as this film is too transparent for its own good. Tom Hanks as the founder of The Circle comes off more as an ominous figure than honest one and Emma Watson is clearly the heroine in this morality play. A subject such as this shines brightest when it plays in the gray as opposed to black and white. One more problem with The Circle is its lead, Emma Watson. We’ve seen her grow up before our eyes in the Harry Potter series, but she hasn’t made a worthwhile turn as a leading lady and her performance here is no different. She meanders from one scene to the next without any emotional investment from the audience. Watson is a talented actress, but nowhere near as captivating as she should be on screen.

“The Circle” showed real promise in its trailers and previews. What we end up with is an ineffective paranoid thriller that not even the great Tom Hanks can save from mediocrity. The Circle’s movie poster shows a maze leading into the circle, what we get instead of a maze of intrigue we get a typical “Point A to Point B” potboiler that never boils over. The audience will leave “The Circle” more likely chuckling about its conclusion than pondering it.

The question of internet privacy and personal freedom still looms large in our society and the further we immerse ourselves in this world the less we’ll care about these questions because we all so easily give up our freedoms willingly to these Silicon Valley tech companies. Ironically, The Circle’s somewhat silly and ominous warning maybe one we can’t avoid and one we’re more than willing to embrace wholeheartedly in the near future. Maybe one day the circle will be completed and it won’t be anyone’s fault but our own. If, of course, you’re paranoid enough to believe it.

'The Circle' has no comments