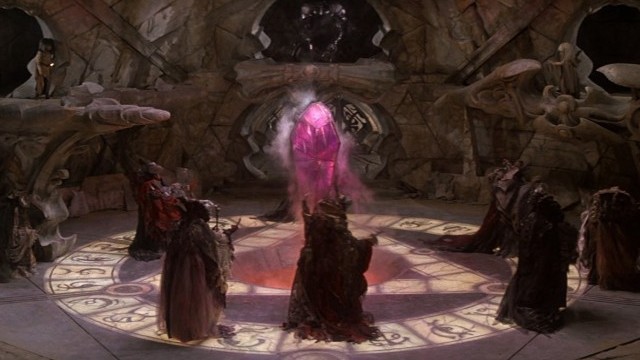 Jim Henson had nothing to prove when he made “The Dark Crystal.” In fact, as legacies go, his was already staggering. At that point in his career, having been the creative force behind “Sesame Street,” “The Muppet Show” and the still-magical “The Muppet Movie,” Henson came across like the cuddlier, wilder Walt Disney. Henson’s works encouraged not only support for children’s education but the notion of empathy and having a sense of humor about oneself. While the arrival of Henson’s years-in-the-making, surprisingly grim “The Dark Crystal” in 1982 seemed like a change of pace for him, it was also a master’s thesis on his ability in storytelling and characterization through puppetry. Many children of the 1980’s look back on “The Dark Crystal” as a scary, intimidating work, and, in the richest sense, it is.

In a world overcome by an oppressive darkness, the vulture-like Skeksis reign supreme. By controlling the all-powerful crystal of the title, the grotesque, power-mad Skeksis rule the land. Despite their use of spider/crab/nightmare-inducing monsters called the Garthim to do their dirty work, the Skeksis fear a prophecy that a pure being, called a Gelfing, will over turn their world domination and bring light to their preferably drab existence.

The screenplay is Tolkien-inspired but so take-it-or-leave-it weird, it uses “The Lord of the Rings” as a creative-jumping off point rather than a blueprint or outright copy.  While “Willow” (1988) was George Lucas’ blend of “Star Wars” infused with Tolkien, this is something altogether different. Henson is actually applying the optimism of the Flower Power Movement and how it contrasted with the cynicism and corrupt bureaucracy the Hippie generation was standing against. While the Gelfings are hobbit-like and they seek to alter a sinister force oppressing their world, this is actually a tale of earthy, spiritual hippies taking on the ruthless, uncaring bureaucrats.

If you’re willing to surrender to its gradual pace and vast strangeness, you’re in for a treasure chest of Jim Henson magic. The puppetry is so extraordinary, these characters exhibit quirks and a soulfulness. Henson and co-director Frank Oz, as well as scores of gifted puppeteers, are working at the top of their craft.

Like any great fantasy or bed time fairy tale, the villains are everything. The Skeksis are vain, stupid, belligerent, withered and very funny. There’s a hilarious, ghastly death bed scene where the elderly Skeksis greedily clings to his scepter, feebly struggling to stay alive, declaring, “Mine!” As a political allegory, the Skeksis are still a potent stand-in for any cluster of greedy, indifferent mean old bullies in power.

Arriving in a fantasy-rich decade that included not only “Labyrinth” and “Willow” but strong contenders like “Legend,”” “Return to Oz,” “Dragon Slayer” and “The Never-Ending Story,” Henson’s film has the edge in that everything we’re looking at is hand-made and articulated by unseen artists. There are admittedly some optical effects and matte paintings but really, Henson’s literal and thematic fingerprints are all over this one.

The imagery is often powerful: note the sad, stripped and pathetic Skekis Lord Chamberlin cowering in a corner. There’s also Aughra’s astonishing globe room, the moving flashback of Jen, the protagonist,  being raised by the Mystics and the John Ford-like shot of the Mystics marching against the sunset. Then there’s the thrilling finale, which is somehow both bizarre and emotionally satisfying.

Trevor Jones’ majestic score adds an additional layer of wonder and excitement to Henson’s scrappy epic. It may be too much for those expecting the whimsy of Fozzie the Bear and not a good pick for the small fry. However, if you and your keiki are old enough for Harry Potter, the works of Tolkien and never miss a movie about The Force, then this is one to experience and savor.

'The Dark Crystal' has no comments