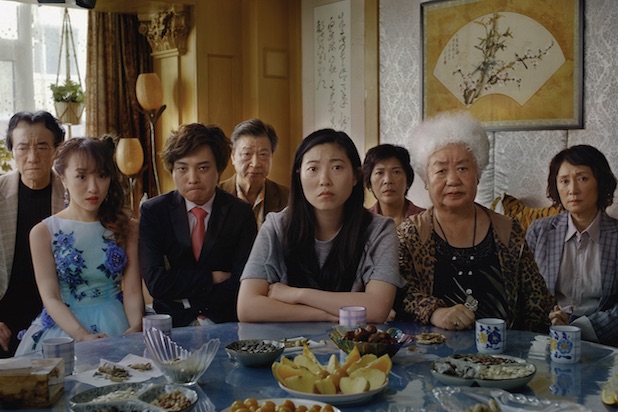 When we meet Billi (played by Awkwafina), she’s broke and living alone in New York. The one constant in her life is her relationship with Nai Nai (played by Zhao Shuzhen), her grandmother who lives in China. Billi is informed by her parents that Nai Nai’s doctor discovered she has cancer. Nai Nai doesn’t have much longer to live and, even worse, no one in the family is going to tell her. In fact, a wedding in China is planned as an excuse for the family to have a few last moments with Nai Nai and Billi is not invited. While Billi obeys her parents and promises to keep Nai Nai’s ailing health a secret from her, she goes to China anyway, attempting to bond one final time with her grandmother.

Writer/director Lulu Wang has really come up with something special here- “The Farewell,” despite my description, is a comedy and a unique, sensitive and absorbing look at cultural differences. While Billi speaks English and lives in America, her identity as a Chinese woman is tested when she is expected to honor a tradition of not informing a family member of a cancer diagnosis; the reasoning: according to Billi’s mother, the fear is what kills you faster than the disease. Wang’s film invites the audience to be conflicted about the decision of Billi’s family to keep Nai Nai in the dark about her health. What results isn’t condescending, mawkish or remotely predictable. The humor, like the film itself, is gentle, quiet and comes from moments of deep human connection.

“The Farewell” is powered by a terrific dramatic performance by Awkwafina and Lulu’s compassionate, observant approach to the story. The family’s decision to maintain an elaborate deception, particularly  during the funny wedding sequence, seems like a form of self inflicted cruelty. Yet, as conflicted as they (and we) are about this ongoing lie, there is also a humane, loving quality to it. Wang’s film overall explores the lies, great and small, we tell ourselves and those who are closest to us. Billi’s early conversation with Nai Nai has a few little white lies, which, like the big whopper she shares with her family, are intended to protect Nai Nai from the painful truth.

There is suspense as to whether any of the characters will break Nai Nai’s carefully maintained illusion and the final moments find a poetry that is deeply moving. The scene of Billis partaking in Nai Nai’s exercise ritual touches the heart, because we see all too clearly their genuine bond and why Billi loves her so much.

Awkwafina is vulnerable and lovely here, a giant step up from her showcase in broader supporting turns last year. She’s a major talent and is surrounded by a wonderful ensemble of actors in their element. Wang’s film takes it’s time to build character, which may strike some as dreary, but there’s no mainstream formula or detached humor that mars the film’s ability to absorb.

There are moments here that deeply resonated with me. I’ll end on a personal note. The last conversation I had with my late Grandmother Flo was over the phone, when she was late into her battle with breast cancer. Flo was extraordinary, an opera singer, community builder, home maker and overall miracle of a woman, who gave me so many examples during her long life that continue to inspire me. We were very close and she was among the first adults I ever shared grownup conversations with in my childhood. I was twenty-three when I last spoke with her, a brief conversation that began with her saying, “Look, Barry, you know I love you, and I know you love me, so let’s not make this too hard.” I told her I loved her and that was the last time we ever spoke. I thought of that while I watched “The Farewell,” which understands how hard it is, not only to lose those dearest to us but how difficult it is to move on afterwards. This is a tribute to those we’ve lost and the possibilities life presents afterward.

'The Farewell' has no comments