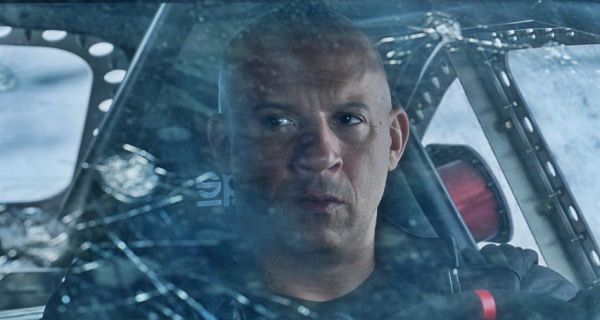 No one could have ever predicted the enormous success of the “Fast & Furious” franchise. A niche movie that focused on the car culture prevalent in the 90’s skyrocketed to mega box office numbers and has become part of the pop culture zeitgeist. Now in its 8th iteration, can F&F keep up its relentless pace or is its motor ready to blow?

“Fate of the Furious” sees the familiar F&F family on a new mission combating an all too familiar enemy. Dom and Letty now reside in Cuba strengthening the local car culture and living a quarter mile at a time. While enjoying his new lease on life, Dom is confronted by a beautiful blonde who says that she requires his expertise for a mission she needs to fulfill and if he refuses it may cost him more than he is willing to pay. Meanwhile, Hobbs is leading a normal life in the states as a father coaching his daughter’s soccer team. Hobbs is approached by federal law enforcement seeking his assistance in retrieving a powerful EMP that could easily shift world powers if not put in the right hands. Hobbs calls upon Dom and the rest of the team to intercept the device, but what Hobbs and the rest of the crew are not aware of is that Dom is on an alternate mission seeking to betray his team, intercept the EMP device and deliver it to his new boss, Cipher, who has plans for the EMP all her own that could have global consequences.

“Fate of the Furious” is in a unique position. Every passing F&F film has consistently topped the prior entry, but how long can that momentum last before it becomes a movie just going through the motions? This question may not be F8’s problem at all. As a matter of fact the cast from Vin Diesel, Dwayne Johnson and Jason Statham all come to the show ready to play. Even the new villain played by Charlize Theron is on the level of a Bond villain. All the action set pieces are astounding and exciting and well worth the price of admission. So what’s the problem with F8? The problem is that director F. Gary Gray and writer Chris Morgan decided this time around to attempt to make a good movie as opposed to a F&F movie. There is a substantial difference between the two. After 7 films, the F&F family no longer cling to any notion of being real people. They are for all intents and purposes superheroes ready to due battle while performing unbelievable feats of derring-do and possessing driving reflexes of a professional F1 driver. F8 substitutes some of its brand of absurd action sequences for something on par with a 007 film. In prior F&F films I was able to look on in amusement as the F&F family jumped out of a plane while in a fleet of cars or Paul Walker sky surfing on the back of a classic convertible while Vin Diesel flies said car and somehow both live to tell the tale. These sequences had nowhere near any sense of reality and that’s what made them so memorable. In F8, the filmmakers have put a governor on the F&F family and given them a reality based tale with a darker tone dealing with Dom’s past. I’ve mentioned it several times here already, but this iteration has little resemblance to past F&F films and is more akin to a James Bond adventure. This ultimately sucks some of the fun out of F8 and could hurt the F&F franchise if they continue down this road. Don’t get me wrong, there are flashes of what made the franchise great here (Jason Statham’s airplane gun fight with baby in tow is gangbusters), but not enough to make this entry feel as special as “Fast Five”.

F8 is not a bad movie it’s just not an F&F movie. It’s only an F&F movie in relation to its message of the importance of family and I have always admired that message no matter how cheesy it’s become. Let’s hope they bring back the absurd that put such a big smile on my face in the last three entries. F8 is hopefully just a speed bump of what awaits us in the next entry. Rumor has it that our F&F heroes are headed into space. Fast cars, big guns, and “The Rock” in space? If that’s what’s waiting around the bend then you can count on me at the premiere. Until then, know F8 is good, but the franchise has matured and living a quarter mile at a time has proven to be an exhaustive endeavor. Let’s hope they can recapture some of that youthful energy in the next movie that’s kept me coming back to the multiplex for these many years.

'The Fate of the Furious' has no comments