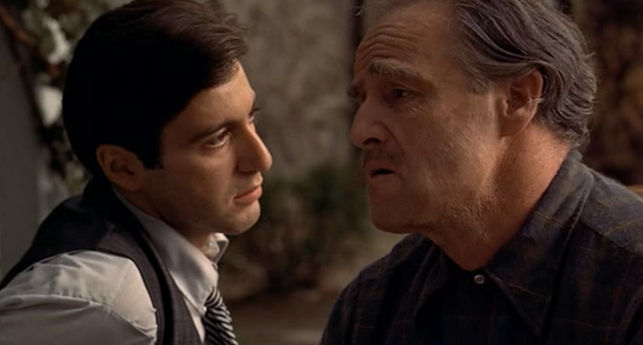 The opening moments of Francis Ford Coppola’s “The Godfather” are like a dream coming into focus, as we’re pulled into another world and drawn in with rich, enticing storytelling. A man named Bonasera is addressing Don Vito Corleone (played by Marlon Brando), the elderly “Godfather” mob boss whose daughter, Connie (played by Talia Shire), is having an elaborate wedding just outside his darkened office. Bonasera tells Corleone a tragic story, asks for a diabolical favor and begins his plea by declaring, “I believe in America…”

We witness this long monolog from Corleone’s perspective, which allows us to feel the power and sympathy he feels towards his guest. Coppola’s film casts a spell from this opening scene and never lets go.

As the joyous wedding festivities carry on, we meet the rest of the Corleone family, all of whom are in the “family business” and take their orders from Vito. The lone exception: Michael Corleone (played by Al Pacino), the decorated WWII survivor who arrives with his lovely girlfriend, Kay (played by Diane Keaton). Michael informs Kay that he is aware of his family operations but doesn’t take part in their crimes. Gradually, as the story takes shocking turns, we realize that Michael’s introducing Kay to his welcoming family has doomed them both.

Brando’s performance is among the most mimicked, analyzed and celebrated in all of cinema. Casting aside all of the baggage such an iconic turn brings, it’s easy to become lost in his work. Although he was only 47 years old when he played the grandfatherly but commanding Vito Corleone, his portrayal feels lived-in and spontaneous, not a parlor trick.

Pacino and Keaton, appearing very young and beautiful, are the film’s tragic center, playing the innocent, idealistic young lovers who are pulled into a moral vortex. Kay provides the audience surrogate, as we share her horror and fascination. James Caan, in his breakthrough role, is perfection as the terminally hot-headed Sonny and Robert Duvall is wonderful as the steel-nerved Tom Hagan, the Corleone’s lawyer and surrogate son. Shire is sublime as the abused Connie and John Cazale’s sad Fredo continues to haunt me.

The draw of “The Godfather” runs deeper than Mario Puzo’s expansive, devilishly pulpy narrative and the maximum entertainment value it creates. The thing about the Corleone family is that, despite how they’re a bunch of murdering criminals, we really like them. In fact, we grow to love them, even as their actions become increasingly extreme and indefensible. We lean forward and find ourselves both identifying and rooting for this assortment of colorful, volatile family members and recognize their emotions and passionate family dynamics as our own. In a very real way, the Corleones are like every family. Movies allow us the safe distance to “root for the bad guy” and live vicariously through the villains but Coppola’s film takes it even further. We want the Corleones to succeed, to get away with everything and find salvation from the terrible destinies that await them.

“The Godfather” is now 45 years old but hasn’t lost any of its power. Its 3-hours long but never stops moving. The violence is rough, even in 2017, as Coppola never glamorizes the mobster lifestyle or flinches from the lives that are taken.

Gordon Willis’ cinematography, with its gold and brown and hues, makes the proceedings appear like a faded photograph or a distant memory. When the second act takes a sudden location change to Sicily, the imagery brightens up and becomes a sprawling contrast to the intimate, gloomy setting of the Corleone home.

Among the numerous works that owe a debt to Coppola’s film include “The Sopranos,” “Casino,” and “Goodfellas” (which makes the shared observation that no one steals money from the bride at a mafia wedding). Watching all three of these movies back to back (and yes, the masterful, widely misunderstood and horribly underappreciated “The Godfather Part III” is essential), you witness Michael’s shocking journey from a shining war hero to a fallen, King Lear-like patriarch.

Nearly every scene is legendary and there’s a quotable line seemingly every five minutes. “He made him an offer he couldn’t refuse” and “Luca Brazzi sleeps with the fishes” are the most famous. Yet, my favorite is this quirky retort after a mob hit: “Leave the gun, take the cannolis.”

'The Godfather' has no comments