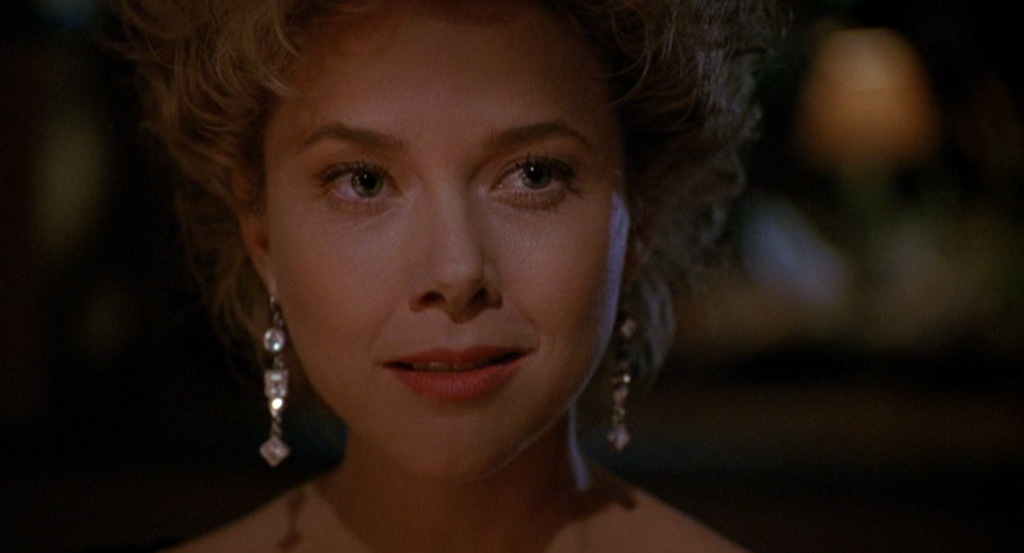 “The Grifters” takes place in a neo-film noir world in which the sins of many have caused the paint to peel and the floors to turn grimy. Everything seems tainted. I’m talking about the kind of places where your arm sticks to the surface of a greasy table at a tired diner. Or a bus stop with a floor littered with used lottery tickets, and fleabag motels with glowing neon signs failing to mask the owner’s desperation. Inhabiting this world are seasoned con artists who speak the lingo, live to deceive and can’t get enough of what they do. I love movies like these.

No filmmaker has gotten the look, feel and themes of crime novelist Jim Thompson’s work better than British director Stephen Frears. His prior film to “The Grifters,” the celebrated “Dangerous Liaisons,” was a mild warm up for this one. Thompson’s 1963 novel, which has been faithfully (perhaps ruthlessly is the better word) adapted by Donald E. Westlake, has been made into the film that could take place in the early 60’s, mid-70’s, late 80’s or sometime in between. We’re never told when this is taking place and it doesn’t matter, as the look suggests some time in the latter half of the 20th century.

We meet our three central characters in a brilliantly established introduction, in which a title card, Martin Scorsese’s brief but terse narration and a cleverly staged, triple-split screen show us who The Grifters are. We meet silver-haired and sleek Lily (Anjelica Huston), the boyishly handsome Roy (John Cusack) and the slinky, beautiful Myra (Annette Bening), all on their way to their latest (and, no doubt, far from last) victim of the day. A great touch is how, right before they walk in a doorway, all three of them look over their shoulders.

Huston’s Lily is a tigress, a tough-as-nails racetrack figure who’s been in the con game for so long, nothing “normal” remains in her life. Cusack’s Roy is Lily’s son, a novice con artist who wants to go the distance. Bening’s Myra has a barely intact conscience, as her loyalties and moral choices seem transient. Roy’s uneasy, blatantly Oedipal-like relationship with his mother is made even stranger for how Myra, his girlfriend, seems almost like the woman Lily must have been earlier in life. These three characters, who make a deranged, dysfunctional family unit, have difficulty being straight with one another. This isn’t just because they can’t stop lying but a reflection of the only way they know how to communicate with other people.

It’s revealed that Roy and Myra are dating but, at first, unaware of each other’s profession, as she accidentally discovers Roy conning a group of sailors on a train. We never know how these two could miss the obvious fact that they live to fool people out of money, though we’re not supposed to take it as a coincidence. It’s more likely that their shared disease of self destructive behavior drew them together, like rattle snakes attracted to the scent of venom.

Right from the start, Frears delivers Thompson’s ultimate message, that being a con artist is as  addictive and dangerous as compulsive gambling or alcoholism. The thought of an honest, 9-5 job is a death sentence for these characters. This is a dark morality tale of three damaged souls, only too happy to compromise everything they are to keep everything they want.

If any film sought to undo the glitz and charm of “The Sting” or “Dirty Rotten Scoundrels,” it’s this one. This isn’t a comedy or a study of con artistry one-upmanship, but a cautionary tale of how this line of work can only lead to a form of oblivion. Modern film noir is rarely this authentically cruel, scuzzy and authentically pulpy. You may have a hard time liking these characters (even Cusack’s), but you’ll be unable to take your eyes off of them.

There’s an extended sequence mid-film in which we learn Myra had a mentor, played by the late, great J.T. Walsh. This portion is a perfect movie-within-the-movie, capturing the excitement and psychological consequences of being a professional liar. There’s also a great shot, late in the film, where we see Lily, sitting on a motel bed, clothes scattered everywhere, cigarette in hand and “The Lady Vanishes” playing on the TV set. The image closely resembles the invitingly sleazy cover of dime store novels, the kind that Thompson’s work was known to grace.

From the very beginning, Frears makes this playfully but unobtrusively stylish, with clever color coding (both in the clothing choices and the lighting) indicating just how crimson the souls of his protagonists have become. Elmer Bernstein’s score is delicious and sinister, one of those film compositions so great, you can’t imagine the film without it.

The performances are top notch- Huston is incredible, making Lily’s languishing pain (both psychological and physical) a scar she uses as her armor. In Cusack’s first non-teen comedy role (right after “Say Anything…”, no less), he finds a lived-in hardness and wounded pride in Roy, one of his best roles. Bening is so intoxicating, it’s easy to miss how layered her work is. Myra tells bad jokes and shamelessly flaunts her sexuality, but she’s not dumb. In fact, she’s the only one truly aware of the danger involved in what she does. Pat Hingle is surprisingly terrifying as a vile criminal named “Bobo” (his split second change from Lily’s fatherly mentor to her abusive captor is hard to watch). Everyone here gets what the film is and appears unafraid to portray the allure and toxic aftertaste of their roles.

Is the material misogynist? I wondered that upon re-visiting the film again this year (I think I watch “The Grifters” annually at this point). I believe the film takes place in a misogynistic world (like most film noir, both neo and classic), but the movie is about women who, when cornered by abusive monsters, have survival skills even more powerful than their tormentors.

Like any good thriller, “The Grifters” ends on a truly shocking note. I once showed this to my college Modern Film Noir class and heard audible expressions of horror, revulsion and sadness over the final scene. It’s grisly stuff but notice how Frears caps the moment: the elevator of the surviving Grifter is going down…straight into the inferno.

'The Grifters' has no comments