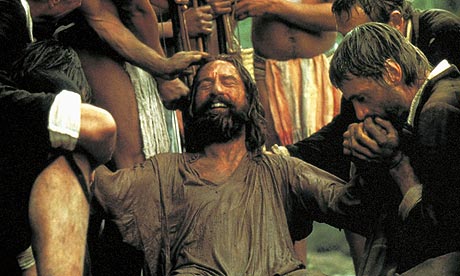 My fifth grade history class was an odd place to first discover Robert De Niro but that’s exactly what happened. My teacher, Mr. Estes, thought the best way to explain colonialism, bring context to what happens when tribes are eliminated by settlers and make us understand some of the more painful chapters of world history, was to have us watch “The Mission.” It was heavy going for a class of mostly 12-year olds and he showed it to us on one of those boxy old TV’s that was so heavy, it had to be carted in. Despite the heaviness of the film, it cast a spell on me and most of my classmates. It also gave me my first glimpse of De Niro, who made a dashing figure in a pony tail, distinguished beard and period garb. I later was enamored by his work in “Raging Bull” and “The Godfather Part II” but the first character he inhabited that I loved was Rodrigo Mendoza.

The film portrays the 18th century conflict between the Guarani tribe who lived in the Amazon and the Jesuit priests who came to “civilize” them. Early efforts go badly, as evidenced in the introductory scene with a priest being tied to a cross and sent down a river. Gabriel, one of the priests, played by Jeremy Irons, immerses himself in the Amazonian jungle, plays his flute and entices the Guarani through his music. This gesture leads to an alliance that forms the creation of a village, where the natives and the priests lived together. Adding to the tense atmosphere is the presence of Mendoza, a vicious slave dealer who, in a stunning turn of events, becomes Gabriel’s student.

Roland Joffe’s film, his masterpiece, is a cinematic feast from start to finish. His celebrated 1984 Best Picture nominee, “The Killing Fields,” was a warm up for this, another compassionate, sometimes horrifying, depiction of humankind at either its most compassionate or unacceptable.

“The Mission” was the last original screenplay written by Robert Bolt, the author of “Lawrence of Arabia,” Doctor Zhivago” and “Ryan’s Daughter.” With its depiction of men of the cloth, exuding either compassion or a destructive self righteousness, it works as a companion piece to Bolt’s “A Man For All Seasons.”

Bolt’s screenplay explores the theme of those in power and privilege abusing those they deem “beneath” them. Also, how those who claim to be the right arm of God can act horribly but still justify their actions as being lead by the Lord. The abuse depicted in “The Mission” isn’t unlike the violence inflicted upon tribes, groups or indigenous people that have occurred in the past and, unfortunately, in recent times.

Joffe is commenting on how violence is a way of disrupting the ways of nature. When the reformed Mendoza rediscovers a rapier, we see how it reawakens the animal within, as he gradually abandons newly passive, collected ways and reverts back to a warrior. There’s also the appropriately odd scene where a group of soldiers chases another by row boat down a river. The opposing side yells out, “kill the priest,” and it becomes a nearly comic sight of splashing boats, floating towards one another and muskets firing. It underlines how awful, absurd and needless the sudden onslaught of violence taking place truly is.

The Irons and De Niro characters are such intriguing contrasts, as Irons is playing a man of unbreakable faith, devoted to compassion and offering himself to God regardless of the scenario, no matter how grim. De Niro’s role begins as a man who seemingly sold his soul years ago. Only after murdering his brother (played well but briefly by Aiden Quinn), we see Mendoza go through a remarkable transformation. The sequence of Mendoza seeking his penitence is extraordinary, as he painfully climbs mountains while carrying heavy bags of his weaponry.

Bolt’s characters are portrayed climbing over masses of rock that stand in for the enormous personal obstacles they face. These scenes have an additional pull, as it looks like the cast is genuinely in danger as they climb, often barefoot, up steep hills with waterfalls rushing past them.

Ennio Morricone’s ravishing, exciting score is among his most famous, though the film’s editing, direction, performances and Oscar-winning cinematography are all first rate.

Joffe is telling an important story and gives the film an immediacy and heaviness not uncommon with Hollywood epics. He also knows when to indulge in pure cinema and allow his Oscar winning cinematographer to linger on some astonishing imagery. There’s a moment late in the film where De Niro is filmed running from a roaring fire, carrying a rapier. Indeed, the image has something to say about Mendoza and his surprising character trajectory. Yet, it’s also an awesome shot, akin to something David Lean would have savored for one of his films.

“The Mission” tells a sad story but this is a thrilling, textured and tragic film. The Morricone music is fantastic but if that’s all you remember about the movie, you need to see it again.

'The Mission' has no comments