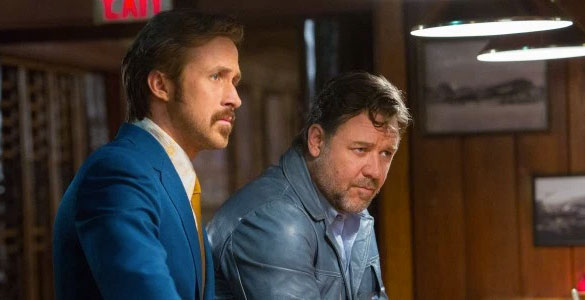 Any fan of buddy action films with great storytelling and witty dialogue must know Shane Black’s work. The writer of classics such as “Lethal Weapon,” “The Last Boy Scout,” and “Kiss Kiss Bang Bang” certainly knows how to team guys up and help them kick major ass while the audience laughs along the way.

So it was with great anticipation that I watched his latest film “The Nice Guys.” I was however, a bit cautious about the casting. Russel Crowe and Ryan Gosling are tremendous actors, no doubt, but would they be able to pull off Black’s humor and wit? Thankfully, they did so with ease.

Crowe and Gosling play a pair of low scale private eyes. Crowe likes to let his fists do his talking while Gosling has no qualms about milking his clients for every cent they have. Neither are particularly intelligent or professional, yet both are definitely extremely talented at what they do. When an adult film star goes missing in late 1970s Los Angeles, the two are forced to work together to get to the bottom of the case which somehow delves into deep conspiracy theories involving the government.

While I thought that Crowe might have been miscast as a Shane Black character, he was very convincing as a bumbling tough guy who can kill just as easily as he can fall victim to sympathetic hearts. But the true star here is Gosling. I never knew Gosling to be so adept at comedy but he succeeds in executing one of the funniest comedic performances of recent years. It’s not just about his line delivery. It’s his facial expressions. It’s his physical comedy. It’s his reactions to others. I definitely would love to see Gosling tackle more comedic roles in the future.

Angourie Rice also does an excellent job as Gosling’s smart and curious daughter, Holly March, bringing back fond memories of another memorable daughter character created by Black – Darian in “The Last Boy Scout.” Holly is just as smart mouthed as Darian, just without all of the f- bombs.

While I wouldn’t put “The Nice Guys” quite up there with Black’s past films, it’s smart, fun and original and certainly welcome in a summer full of franchise films and sequels.

'The Nice Guys' has no comments