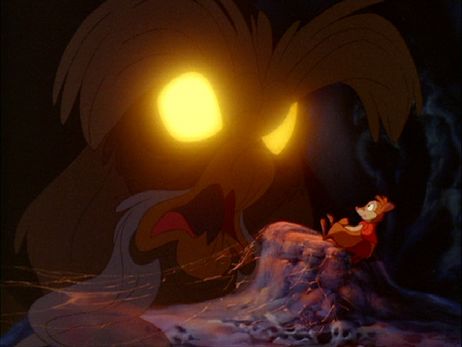 Mrs. Brisby is one of my favorite movie characters, a fiercely devoted mother who watches over her four children. One of them is terribly ill with pneumonia, while the others are a wily handful. Brisby is a widow, terrified of the staggering obstacles in front of her but remarkably brave. Few mothers on film are ever portrayed as being so noble, soulful and devoted to her children but alarmingly vulnerable.

I waited this long to write that Mrs. Brisby is a mouse and that “The Secret of NIMH” is an animated film. Don Bluth’s feature length animated film debut has talking animals and some funny moments but it’s hardly what I’d call a “cartoon.” Bluth was famously a former Disney animator who left the company, dissatisfied with working on films that lacked the depth of the studio’s early, golden age of animation. By leading a walkout of animators and starting his own company, Bluth set out to make the kind of richly detailed, tough and mature animated films that inspired him to become a filmmaker.

While Bluth would later direct “An American Tail,” “The Land Before Time,” “Anastasia,” and “Titan AE,” to name a few, “The Secret of NIMH” is his masterpiece.

The first line spoken is “Jonathan Brisby was killed today, while working on the plan.” It sets the tone, which is somehow both whimsical and deadly serious.

Brisby’s struggle to protect her family finds her seeking “the rats of NIMH,” whose remarkable world and amazing transformation tie into why Brisby’s husband has died. The plot is complex but it all coheres neatly in the end.

There are a handful of action sequences and they all have a fierce quality to them. The initial attack by Dragon the Cat, the arrival of a destructive tractor, an assault by a guard named “Brutus” and the climactic sword fight are all briskly paced, surprisingly intense and even alarmingly violent. With its moments both thrilling and harrowing, Bluth bravely crafted the kind of grim and grown-up moments that marked the later PIXAR works. A moment where Brisby faces the possibility that her child has drowned is stunning in its maturity and anguish. These mice may be animated but no one here is acting like Mickey Mouse. The only hand-drawn animated movie this compares to is the equally troubling and groundbreaking “Watership Down.”

If the painstaking, old fashioned approach to the animation dates the films in terms of technique, it still impresses with the brilliance of the end result. The character movement is expressive, the settings are stunning and beautiful and, while the cast is a farm of wild and domesticated (and scientifically evolved) characters, Bluth has clearly resisted (perhaps even fought) the temptation to make everyone appear “cute.”

In addition to the extraordinary work of Bluth and his animators, another major asset is the exciting, grave and moving score by Jerry Goldsmith. Made right around the time his work for “Twilight Zone-The Movie” would prove to be among his most versatile and inventive compositions, Goldsmith helps each scene in “NIMH” roar to life.

Bluth’s animators craft a film with an elegant, vivid look, a sharp contrast from most other Disney animated films from this period. The storytelling through hand-drawn animation is sublime. A flashback sequence, in which we witness the pivotal origins of the NIMH survivors, is grim and riveting. So is the  depiction of the rats, living like King Arthur’s knights, in an electric Camelot. Despite their remarkable, advanced society, they still have corrupt, Iago-like opportunists in their midst.

Many of Bluth’s subsequent films are equally beautiful and ambitious, though most of them are truly children’s films that work overtime at being merely cute. I like Bartok the Magnificent and Littlefoot the Dinosaur as much as any other child at heart, but none of Bluth’s other movies are as spellbinding as “The Secret of NIMH.”

'The Secret of NIMH' has no comments