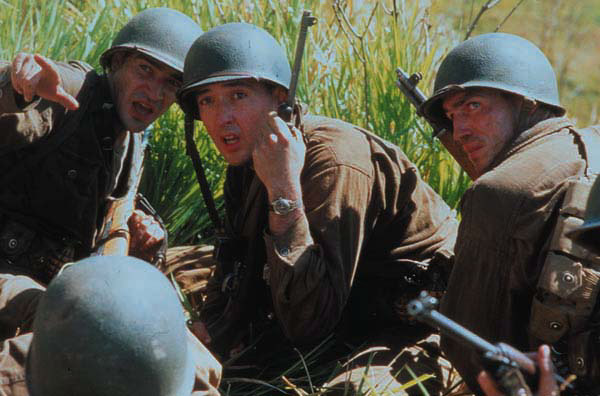 The late 1990’s was an exciting time for cinema. Independent works were being released alongside mainstream blockbusters, Bernardo Bertolucci regularly made new movies every few years and mysterious, untrustworthy reports would spill out of Europe that Stanley Kubrick’s latest work (which one periodical incorrectly identified as “Eyes Wide Open”) was still in production. Then, a real jaw-dropper: Terrence Malick, the director of “Badlands” and “Days of Heaven,” two of the greatest films of the 1970’s, was returning to filmmaking after a twenty year hiatus. Not only was he coming back, but, instead of making his third film a small, easily manageable project, Malick emerged with “The Thin Red Line,” a 3-hour, $52 million, star-studded, wildly ambitious World War II drama.

Malick’s film had been in various stages of pre-production, on-and-off, for extended periods of time and reportedly only came together once Sean Penn showed his support, offered to star and set a tone for the level of commitment required from his co-stars. While Malick made “The Thin Red Line,” Steven Spielberg sprinted past him and released his “Saving Private Ryan” months earlier to enormous acclaim and audience popularity. Malick’s film has this in common in Kubrick’s “Full Metal Jacket”: Kubrick’s war film, like “The Thin Red Line,” was overshadowed by a far more popular film released earlier and depicting the same subject matter. Oliver Stone’s “Platoon,” in theaters a year before “Full Metal Jacket,” was not only a monster hit but an audience favorite that re-ignited public discussion on the Vietnam War.

The box office is telling (whereas the Spielberg and Stone films made well over $100 million, Kubrick and Malick’s film topped out around $40 million or so) but the reception from filmgoers even more so: Kubrick and Malick’s films don’t go down easy or allow patriotism and good/evil scenarios to give the audience a sense of comfort or rah-rah excitement. While audiences immediately took to “Platoon” and “Saving Private Ryan,” Kubrick and especially Malick’s films have found greater appreciation long after their theatrical release.

Malick’s films are more cinematic poems than straight-forward narratives, favoring “stolen shots” of nature and unplanned moments of actors to interject scenes. His often-experimental editing process can make some of his works seem the result of a man with a frustratingly short attention span. There is nothing formulaic about Malick’s work, as neither the production itself nor the final result of his films feel like anything else made by another American filmmaker. His films are challenging and, yes indeed, they are pretentious (as is every great film by every other great filmmaker). Malick is a true filmmaker auteur, an original, distinctive artist whose works are always personal, and introspective.

As “The Thin Red Line” begins, an alligator immerses itself in a body of water. The theme of nature being threatened is firmly established. What follows are blissful scenes of Private Witt (played by Jim Caviezel) enjoying an AWOL stint on an island setting. The dreamy, lush visions of Witt immersed in nature are interrupted by the appearance of a military ship (appearing in the same jarring manner as the sailing vessel that marks the arrival of colonists in Malick’s 2005 follow-up film, “The New World”). Witt is captured and reprimanded by Sgt Welsh (played by Penn) and their scene sets another tone: although this is a WWII drama, the exchanges between the almost-all male cast have an intimate, brotherly quality. It’s not only Malick’s dialog (full of direct, philosophical musings in lieu of rote exposition) but the manner in which these scenes are played. Sure enough, the following scene has a similar quality, as Nick Nolte’s Lt. Col. Tall and John Travolta’s Brig. Gen. Quintard discuss the plans to invade Guadalcanal; it sounds more like we’re hearing alarmingly vulnerable revelations than realistic wordplay, a quality also present in the multi-character narration.

As we’re offered introductory moments with the U.S. soldiers, we see their fears and uncertainty. While most WWII films allow for broad, often humorous introductions, the characters here are visibly afraid of what’s ahead. There’s a long wait for the battle scenes to begin but, when they do come, there’s raw emotion and fierce intensity. In addition to the remarkable beauty of John Toll’s cinematography, there’s a clear geography of the setting and a nearly tactile vividness of everything we’re seeing.

“The Thin Red Line” only loosely explores the history of WWII and the expectations of its genre. The period details reflect the 1940’s but the focus is on the men and their inner thoughts over the specifics or the aftermath of the central battle. Like “From Here to Eternity” (authored by James Jones, who also wrote the book upon which this movie is based) or “Paths of Glory,” the era is important but there is a timeless, universal quality to the characters and issues raised.

Caviezel has the charisma and ability to hold the frame like a young Paul Newman and creates a fascinating character. His hypnotic performance carries the film, though Penn, Nolte, Elias Koteas, Dash Mihock and Ben Chaplin are all fantastic. Jared Leto, John Cusack, George Clooney and Travolta have strong introductions then disappear.

The title can be interpreted as a nod to how easy life and death intertwine during war. However, it’s also a reference to the study of contrasts on hand:

The struggle for survival and (as stated by Nolte’s character) the necessity for soldiers to die, the horrific cruelty of war amidst the serenity of nature, bravery vs. cowardice and the reality of war interrupted by the escape of a golden memory.

Malick’s film asks big questions and doesn’t provide easy answers. Both anti-war and a tribute to heroism, “The Thin Red Line” is a divisive work for those who want their war films presented as gung ho reenactments, ending with uplift and personal triumph. Here, the thoughts of the protagonists are alarmingly naked and existential, not strategic or hyper-masculine. The sequences depicting combat have, strangely, both an otherworldly beauty and wrenching, blood-spattered horror. There is a compassion here for the wounded soldiers as much as the “enemy” (the Japanese soldiers appear as haggard, fearful and noble as the Americans), as well as the mindset of those who serve. Pain and ecstasy merge equally onto Malick’s cinematic canvas, which, for a war film, has the boldness to celebrate life as much as it shows it being quickly taken from those on the battlefield.

'The Thin Red Line' has no comments