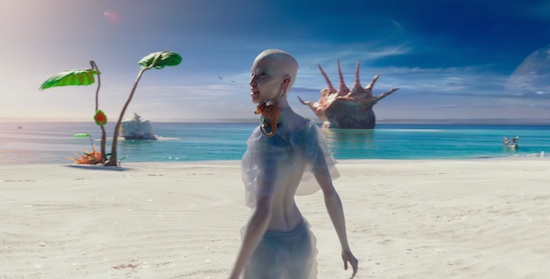 I saw Luc Besson’s “Valerian and the City of a Thousand Planets” on opening day at the Queen Ka’ahumanu movie theater, an experience that filled me with nostalgia. As I walked down the hallway to the screen showing Besson’s film, I recalled my time there as an ausher, twenty years earlier. If anyone reading this attended a movie there during the summer of 1997, I probably tore your ticket, served your hot dog, re-filled your tub with popcorn, pointed the way to your screening or (in one unique case) helped your child find you after running traumatized out of a screening of “The Lost World: Jurassic Park.” The smell of fruit punch and popcorn always brings me back, as does Besson’s “The Fifth Element.” I began working there right as Besson’s Bruce Willis-starring sci-fi epic had its US unveiling, and stood out for its unapologetic weirdness. One of my jobs that summer was to regularly check each screening room and make sure all was going well. I used to time my walk-bys to catch my favorite scene from “The Fifth Element” (which was playing on two screens): when the alien Leeloo escapes from her captivity and discovers the outside world of high rises and flying cars. On the big screen, that sequence made my jaw drop every single time.

For the first twenty minutes of Besson’s “Valerian,” it seemed he had matched and maybe surpassed the cracked wonder of “The Fifth Element.” The opening titles, set to David Bowie’s “Space Oddity,” cleverly create the enormous mythology of the world unfolding (which is based on the French comic book series “Valerian and Laureline” by Pierre Christin and Jean-Claude Mezieres). What follows is a gorgeous sequence involving an alien world where giant sea shells stand in for islands and cute, tiny creatures excrete pearls. It’s all very goofy but so overstuffed with imagination and beauty, I didn’t care.

Then, we meet our heroes, Valerian (played by Dane DeHaan) and Laureline (played by Cara Delevingne), both “government agents” who go on a series of missions and survive one action sequence after another. They’re obviously not very good agents, as each mission ends with a cliffhanger where one or both of them barely survive. The bigger problem, which also the giant black hole at the center of this promising but frustrating movie, is that the leads have no chemistry.

DeHaan and Delevingne can act but play their roles in the same one-note manner. Both were clearly aiming for the quick, back-and-forth banter of a Nick and Nora-type pair but they generate no heat. For a couple of would-be lovers, they come across as bratty siblings. Unlike the odd but effective pairing of Willis with Milla Jovovich in “The Fifth Element,” there’s no suspense and little rooting interest in our heroes, which is leaves this without a center.

There are also big problems in terms of a wobbly tone; the wonder and awe of the carefully paced early scenes give way to a barrage of action scenes and confusing storytelling. Its not a surprise that Besson would re-hash narrative aspects of “The Fifth Element” and “Star Wars” but the fatally stupid second act all but sabotages his grandiose intentions.

Its at the point Rihanna shows up that the film takes a fatal nose dive (though, allow me to be clear, it’s not entirely her fault). Watching this ravishing space opera begin brilliantly, then stumble and become a clumsy Bugs Bunny cartoon is disheartening.

Besson’s consistently eccentric, very-French epic is both exhilarating and quease-inducing. Like many of his prior works, the “French Spielberg” has fashioned a film that’s too cartoonish for adults but too kinky for children. This has as much visual splendor, eventful swashbuckling, dense storytelling and blatant stereotyping as the “Star Wars” prequels.

Rihanna’s appearence as Bubble, the mighty morphin,’ blue, blobby alien, poses an unkind question: what does the talented singer regret more? Appearing in this movie or “Battleship”?

The score by Alexandre Desplat is as lovely as the oodles of CGI effects. If you see this movie, make sure it’s on a big screen. Still, the final wrap up scenes are flat, leaving an obvious opening but little interest in a sequel. Besson’s lavish ode to his youthful obsession is both full of grandeur and childishness. Parts of this are as grotesque and overdone as Besson’s “Arthur and the Invisibles,” but enough moments made me wonder (albeit briefly) if it wasn’t too late for the film to course-correct itself.

By the way, I have a bone to pick with the title (which ought to have just stayed as “Valerian and Laureline”): Considering how the title location is created, shouldn’t it have been dubbed The Planet of a Thousand Cities? Rather than setting up a potential franchise, this provided that familiar, sinking feeling when a great looking movie loses its way.

Besson needed actors to ground this thing and make us believe in their protracted love story.
“Valerian and the City of a Thousand Planets” convinces us of startling new worlds and creatures but failed to make me believe that two attractive young teens could fall in love.

'Valerian' has no comments