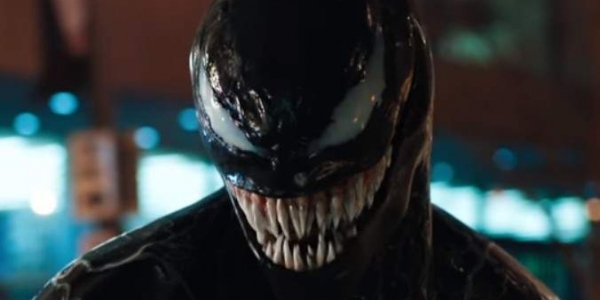 My younger brother Marty had a Venom action figure that used to freak out my mother. It was likely due to how, if you pressed the button on the back of the figure, it would declare, “I wanna eat your brain!” Venom is an offshoot of Spider-Man and a towering, black-clad figure, who plainly resembles a bigger, buffer, and evil upgrade of the friendly web slinger. If you combined Spidey with H.R. Giger’s Alien, and imbued him with a sick sense of humor and a tendency to bite off the heads of his enemies, you’d have Venom, the creation of Todd McFarlane and David Michelinie.

The first time Venom was introduced on film, it was late into the third act of Spider-Man 3 from 2007, where Topher Grace’s Eddie Brock became the character after the film seemed to have ended three times before. It was an unfitting, dismissive way to debut the character to the big screen. In fact, it was a lot like the manner DC Comics’ Bane was first brought to the movies, as a buffoonish background figure in the infamous Batman & Robin. Tom Hardy’s distinctive, much-debated, and appropriately loathsome take on the character in The Dark Knight Rises reshaped and redeemed Bane as a memorable film villain. I was hoping Hardy, a brilliant actor, would shape Venom the way he did Bane. As it stands, I’m astonished that Hardy has now appeared in a worse film than the Reese Witherspoon/Chris Pine rom-com fiasco, This Means War.

Hardy’s Brock is an investigative journalist discovering the nefarious goings-on at a top secret science lab, where a rotten CEO (played by Riz Ahmed) is using human subjects to test extraterrestrial matter. Brock himself eventually absorbs the alien goo, a symbiotic life form named Venom, that gives him super strength and a scary voice in his head, and makes him transform into our favorite brain munching anti-hero.

Let me start with the lens flares: There are so many of them, I wondered if there was something wrong with the projection in my theater. The details of the story don’t add up: Brock’s beloved investigative journalist program doesn’t look like a show anyone would find compelling (as a TV personality, he’s no Geraldo Rivera or even Chris Harrison). A love triangle between Brock, his ex-fiancee Anne Weying (played by Michelle Williams), and Anne’s doctor boyfriend either makes zero sense or was severely edited into the shapeless, tension-free arrangement that currently stands.

When the title character finally shows up in act two (after a lengthy build up), the CGI rendering is cool and the bantering between Brock and monster is strange and fascinating. It’s almost fun, except the action is filmed and edited in a way that makes nearly every sequence a jittery blur.

Venom is more interesting for the things it gets wrong than for the few things it does right. Like The Predator, the tone is indecisive and positively haywire. Director Ruben Fleischer made the terrific 2009 Zombieland and appears to have boarded a project where the producers have taken over, re-shot, and re-cut it into a neutered, obscenely short (112-minutes!) product. It’s not as bad or unwatchable as Suicide Squad but has the similar problem of coming across like a rudderless ship going in circles and having no captain aboard to steer it.

Hardy’s ill-chosen Chicago-ish accent (the setting is San Francisco) vanishes during scenes that appear to have been inserted later. As for his performance, Hardy is all-in and that’s not always a good thing. This is the kind of insanely committed tour de force deserving of both Oscar talk and Razzie consideration. Williams is even more out of place here than she was in Oz The Great and Powerful. Hardy and Williams are heavyweight actors who normally choose intense, demanding projects; here, they majorly embarrass themselves. Ahmed plays his villain role in a one-note, robotic manner. Former “SNL” performer Jenny Slate comes off best as a scientist with a moral crisis.

Every bad movie has an irredeemable moment and Venom offers the lobster tank scene, which will undoubtedly become a cult classic. It’s the best and very worst thing in the movie. Venom plays like a big-budget remake of Upgrade, with bits of The Mask, All of Me, Hulk, and the blueprints to every other Marvel movie mashed together.

The awful closing title song by Eminem is at least proof that Hardy and Williams weren’t the only ones who sold out.

One and a half stars

'Venom' has no comments