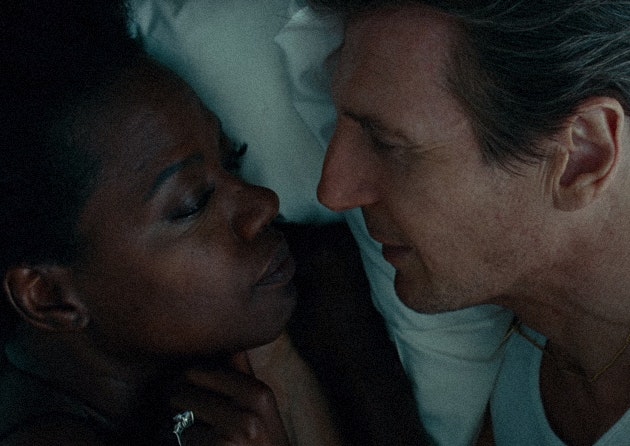 Characters in movies can sometimes reveal a layer to themselves based on the kind of pets they have. This is true of real life, too. If you’re looking for a window into the soul, note the kind of animal a person keeps near them for company. In the case of Veronica, the lead of Steve McQueen’s thriller, “Widows,” it’s a fluffy white Westie she’s named Olivia. Veronica’s bond with her dog is quite telling; after she loses her criminal husband (played by Liam Neeson) to a botched robbery, Veronica recruits the widows of her husband’s associates and plots out an elaborate heist. As Veronica moves from one location to another, Olivia is almost always at her side or being carried like an accessory. It’s not remotely comical but genuinely touching, as Olivia is all Veronica has left of her humanity and former life. She grasps lovingly onto Olivia, because she knows she may compromise it all.

“Widows” is faithfully based on an 80’s British mini-series and has been adapted by McQueen and “Gone Girl” author Gillian Flynn. The modernization works and so does transporting the location to Chicago. Filming his first big budget movie in the states suits McQueen (you know it’s an expensive movie when you hear a Michael Jackson song casually playing the background).

This is pulpy, nasty stuff, though its McQueen’s most restrained and mainstream effort thus far. As far as female-led heist thrillers go, it’s a much more substantial, richly crafted workout than the light-as-a-feather “Oceans 8” but, nonetheless, not as spry as F. Gary Gray’s “Set It Off”. There is a heavy-handedness to this, as it comments on citywide corruption and the death of the American dream (a great visual of a dead car lot pushes this idea). McQueen is commenting on racism and Chicago’s status as a city overrun with shootings and corruption. It doesn’t all come together, as the stuffed two-hour running time is eventful but deserving a much longer cut. Still, it comes this-close to classic status and emerges an engrossing, vibrant and angry drama.

McQueen is the director of the Oscar-winning  “12 Years A Slave,” a powerful but overreaching film that managed to bludgeon the audience with ugliness. I’d argue that the film’s blunt force is more numbing than illuminating but McQueen is not subtle director. He also made the far better, devastating “Shame,” about sex addiction, led by an amazing Michael Fassbender performance. “Widows” may be a studio release but it’s not a compromise or a sell-out. From the opening moments, the film is tough, vibrantly filmed and thrusts the viewer into a world where an outsider is always entering a dangerous room.  It’s also a collection of great performances and tour de force filmmaking.

Davis emits an icy intensity that boils under her impenetrable surface. Playing her partners in crime are Michelle Rodriguez (nicely returning to dramatic work), Elizabeth Debicki (in the film’s breakout performance) and Cynthia Arivo, all great. There are two sets of villains, led by a ferocious Robert Duvall and Colin Ferrell (both playing corrupt politicians). Admitedly, Ferrell leans into his Chicago accent a bit too much but his performance is strong. Then there’s an imposing turn by Brian Tyree Henry as a rival candidate and, another major stand-out, Daniel Kaluuya of “Get Out,” quite scary playing a disturbed henchman. Kaluuya is central to an unsettling sequence in which the camera spins around him before punishing incompetent underlings. There’s also a sure-to-be-discussed sequence in which the audience lingers on the exterior of a limo, which conceals a racist rant occurring within. The use of violence is also clever, as a scene where the camera pulls away from a fatal beating demonstrates that McQueen knows suggesting the act is preferable to showing it.

Once we get to the big heist, it satisfies with its unexpected turns and adrenalized suspense (aided by Hans Zimmer’s pulsating score). Despite some loose ends and not amounting to a hall-of-famer like “Heat” or “The Town,” McQueen’s has more than enough to recommend it. Come for the promise of a juicy, adults-only thrill ride and stay for theadorable, scene-stealing, fluffy white dog.

'Widows' has no comments