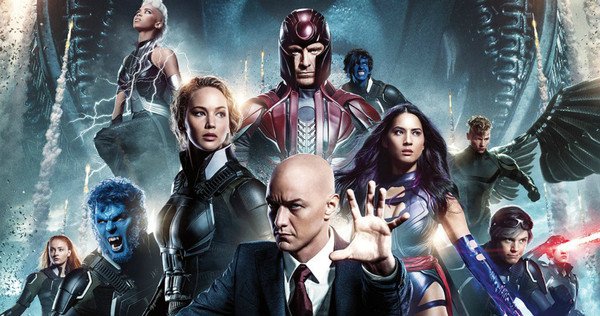 After six entries, you can’t really blame a film franchise for starting to feel like a used car. It elicits comfort and familiarity rather than adventure and excitement. The ride isn’t so smooth anymore but it’ll still get you where you want to go. And it’s hard to let go, even while shiny newer models tempt to take your hard earned money. That’s how I felt about “X-Men: Apocalypse.”

The latest film about the popular mutant heroes introduces Apocalypse, one of their most formidable villains from the comic books. Possibly the world’s first mutant, he awakens from a centuries long slumber to the decade of Members Only jackets and acid wash jeans, the 1980s. He immediately intends to cleanse the earth of anyone he deems weak and recruits four horseman to assist – Storm, Psylocke, Angel and Magneto. Meanwhile, Professor Xavier is doing some recruiting on his own, seeking out students who can learn to control their mutant powers at his School for Gifted Youngsters. Once Apocalypse starts making his presence and powers known, it’s up to the young X-Men to stop him.

Let’s first talk about what the film got right. The young cast of X-Men are a breath of fresh air and a welcome addition to the franchise. Cyclops finally has a prominent role and while Jean Grey felt a little “blah” to me at first, she did start to grow on me. It was great fan service to X-Men comic book fans to show how they meet and witness their relationship grow. Nightcrawler was always one of my favorite characters and much like Alan Cumming’s performance in “X2,” Kodi Smit-McPhee does a great job of exhibiting both vulnerability and humor. But the favorite of course is still Quicksilver. He once again runs away (literally) with the best scene of the film. While the physics of the scene are totally implausible, it doesn’t matter because it’s just so much fun.

Professor Xavier is also given a bigger role in the film and it was great to see him and fellow X-Men veterans Magneto and Beast at the forefront.

Singer has always inserted some random bits of humor in his films but “X-Men: Apocalypse” has a lot more humor than other entries, a welcome addition to such a serious story.

Oh and hey, was that Brat Pack alum Ally Sheedy in a cameo? Cool! Random…but cool!

But where does the film go wrong?

My main beef was with the villains. Apocalypse is supposed to be one of the biggest and baddest villains in the X-Universe yet I didn’t feel he was intimidating at all. His motivation was questionable and for someone who’s supposed to be all-powerful, I never felt like he was a real threat. And his horsemen were pretty much useless. It was cool to finally see Storm with her white mohawk but her, Psylocke and Angel don’t really have much to do. But what I absolutely hated was how they treated Magneto. Magneto is one of the most powerful mutants in the world and he would never wind up working as someone’s minion. I just never bought that aspect of the story as it seemed so out of character.

And please please please get rid of Jennifer Lawrence already. Mystique is supposed to be a cool secondary character, not the leader of the good guys. WTF. Despite her reputation in Hollywood, she’s simply not that strong of an actress and I got really tired of the powers that be force feeding her monotone delivery down our throats.

There were also some other smaller things that bugged me such as the heavy overuse of CGI, the cheap look of some set pieces and the unnecessary long running time.

With that said, “X-Men: Apocalypse” is a fun film, especially for fans of the comic book series. It drags at times but it was still really cool to see all of the characters duking it out on screen. The film franchise has now sampled from some of the most popular X-Men comic book story arcs such as the Dark Phoenix saga, the Days of Future Past story and the Hellfire Club. I’m still waiting for my favorite story, the Mutant Massacre to hit the big screen. And for those in the know, the post credits scene might be a huge tease to heading in that direction.

'X-Men: Apocalypse' has no comments