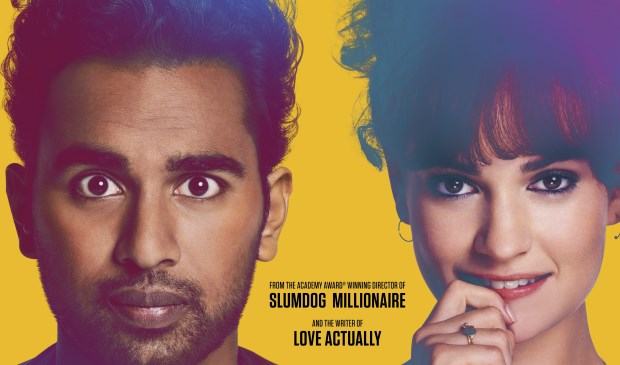 Danny Boyle’s “Yesterday” isn’t the jukebox musical I feared, nor the one-joke sitcom its trailer would leave you to believe. In fact, even with its shortcomings, this is a refreshing summer sleeper that has more on its mind than what’s on the surface.

Television actor and big screen newcomer Himesh Patel makes a strong starring role debut as Jack Malick, a talented singer/songwriter whose career never took off. After surviving  being struck by a vehicle, Jack awakens to a world where is the only person on the planet who knows The Beatles.

To Jack’s amazement, he is now living in a universe that has never heard any Beatles songs and his own personal records and memorabilia have vanished. Realizing the unique situation he’s in, Jack decides to re-start his musical journey by pretending he’s the author of songs such as ‘Let It Be” and “A Hard Day’s Night.”

This “Twilight Zone” scenario is presented with sly humor from screenwriter Richard Curtis, the author of “Four Weddings and a Funeral,” “Notting Hill” and “Love Actually.” Surprisingly, pairing a romantic like Curtis with an edgy cinematic artist like Boyle pays off, as both reign themselves in and keep the focus on the character-driven story.

As good as Patel is here, both as the film’s demanding lead and a stage performer, its Lilly Collins, who plays Ellie, Jack’s friend and manager, who gives the breakout performance. Collins is terrific and gives this its true human center. Far less effective is Kate McKinnon, overdoing it as usual, playing a smarmy record executive. Casting Ed Sheeran as himself is a fun idea and he’s a good sport. Yet, more should have been made of him, as either Jack’s confidant or potential rival.

Boyle dials down his jackhammer visual style considerably and, unlike his disastrous “A Life Less Ordinary” or his uneven “Millions,” never drowns the sweetness with excess. Curtis avoids piling on too many subplots and colorful side characters in favor of exploring his appealingly cracked central notion. Unfortunately, Curtis doesn’t know where to go with it near the end and settles in with a formula wrap-up. As a comedy propelled by a novel gimmick, its nowhere as good as Curtis’ “About Time,” also a sci-fi-tinged love story, that may very well be his best film.

The third act plays things overly safe: note the third-wheel character who serves little purpose and is easily/lazily written out of the love triangle. However, there is a quiet scene, set at a beach house, between Jack and the home’s owner; it is true poetry and the film’s best and boldest sequence.

While I would have liked the premise taken even further than the film allows, there is a great deal here in terms of subtext. Curtis wisely suggests that today’s young audience, raised on decades of mass marketed pop music, wouldn’t fully appreciate The Beatles if the Fab Four were to suddenly appear today as a new band. As Jack finds success with his astonishing stack of “new” hits, we witness the way his/The Beatles’ music is shaped in the studio machine, demonstrating how the purity of the music would be diluted by modern sensibilities.

It’s a strong message and not merely the reflection of an older generation’s disdain; in a century that began with the pre-shrink wrapped karaoke stars of “American Idol” becoming instant icons and radio stations overloaded with auto-tuned tracks with barely discernible lyrics, what chance would  “Across the Universe” have today as a new tune? Nevertheless, “Yesterday” isn’t cynical or pessimistic about the modern state of music and, in the end, declares that the most important thing about great music is that we keep it alive and in constant rotation, from this generation to the next.

For the record, it was during my Freshman year of college that my dear friend Ben Bonnet fully introduced me to The Beatles and let me borrow “Rubber Soul” and “The White Album.” Growing up on Maui, with my diet of rap, reggae and Hawaiian music, hearing “Norwegian Wood” for the first time was realizing the possibilities of great music. Thank you, Ben…and John Paul, George and Ringo, too.

'Yesterday' has no comments