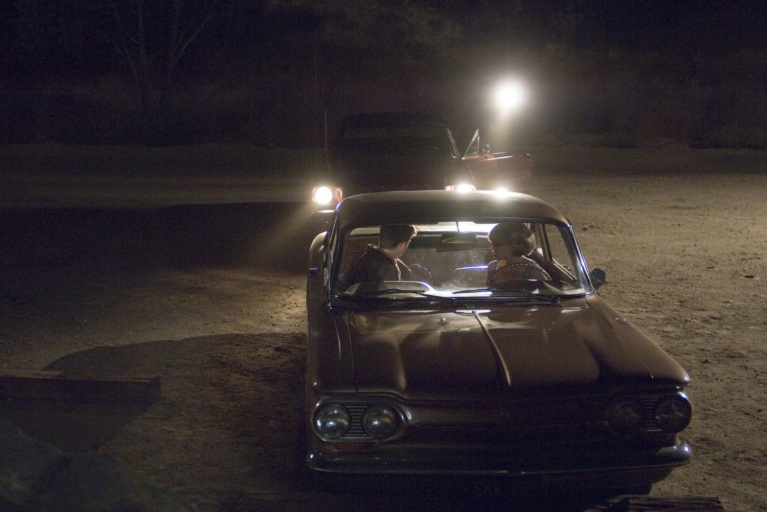 Late into “Zodiac,” Robert Graysmith, the tireless cartoonist-turned-amateur-snoop, is having a red eye meeting at an all-nigh diner with Tochi, one of the key investigators of the lengthy Zodiac killer investigation in San Francisco. Jake Gyllenhall is playing Graysmith, who is explaining to Tochi, played by Mark Ruffalo, the close proximity in which the killings took place. To make a key observation, Graysmith reveals that he walked the distance himself. The look on Tochi’s face initially seems like awe and admiration, but look closer, Tochi is recognizing himself in Graysmith. They both share the obsession, bordering on madness, of pursuing every possible lead, hunch and loose end until they find the killer. Until they do, they’re men chasing a man shrouded in shadow. However, the thrill of the hunt is alive in both of them and may be the only thing keeping them engaged in their lives.

David Fincher’s “Zodiac” is about obsession and emerges a film as meticulous, fetishistic and focused on detail as the investigation it portrays. It’s all about those details, which feel exactly right, from the minor to the large scale. The production here is so good, it plays like every fabric, every song, every pen, every road sign and every street corner have been agonized over to look period-correct. While it certainly looks like the San Francisco of the late 20th century, it’s also the “DO NOT CHANGE VOLUME” sign engraved on the newspaper office TV set or how two cops share a lunch on the go, that feels precise.

Although there are a few scenes portraying the Zodiac murders, they are brief, spread out over the film and mostly avoid sensationalism. One of these scenes in particular, featuring Ione Skye as a motorist traveling with her infant, is terrifying in what it doesn’t show us, until we can no longer hold our breath. Yet, Fincher makes the unusual choice to avoid showing the killer and instead getting us inside the minds of those who pursued him.

Unlike Kevin Spacey’s “John Doe” in “Seven,” Graysmith, the reporters and the law enforcers are chasing an idea, carefully piecing together a profile with clues and suspects who don’t always fit the puzzle. Fincher allows us to share their mounting excitement and frustration over each new case break and over every dead end. Oddly enough, it’s just as unnerving getting inside the minds of our overworked heroes than it would be from the perspective of the Zodiac killer.

Great movies are full of scenes that feel like stand-alone short films. “Zodiac” is overstuffed with meaty, carefully considered and potent sequences that work brilliantly all by themselves.

There are so many great scenes to savor, like the diner meeting I cited at the top of this article. Other stand-out moments include Robert Downey Jr.’s Paul Avery’s handling his becoming a potential Zodiac victim and a truly scary and suspenseful sequence where Graysmith encounters a creepy film enthusiast (Charles Fleischer in a great bit). The best scene may be the meeting Tochi and his colleagues have with Arthur Leigh Allen, who reveals himself to be a likely murder suspect. The way the scene builds, with the cops barely able to contain their amazement and John Carrol Lynch’s even-handed performance, conveying a what-me-worry demeanor, is exemplary. This scene is a master class of editing choices, cinematography and a range of canny acting.

This represents some of the finest work Gyllenhaal, Ruffalo and Downey Jr. have ever committed to film. There’s also Lynch, Clea Duvall, Anthony Edwards, Dermot Mulroney, Elias Koteas and dozens of character actors, all great.

“Zodiac” flopped in theaters and had a brief, tortured run. Following a fall release that was delayed until spring of 2007, rumors emerged that the film was “in trouble.” Actually, Fincher wanted to work on it in the editing room, but the film’s missing its chance as Oscar bait made it seem like an also-ran. Once it belatedly opened, critics were quick to praise it but audience turned away. No doubt the nearly three hour running time, emphasis on dialog and de-emphasis on gore and violent reenactments disappointed those expecting a redux of “Seven.”

Every year, I have read or listen to film scholars drone on about the 1970’s, how they “don’t make movies like that anymore.” Indeed, in our current McMovie atmosphere of corporate cinema, in which producers, test screenings and the need for tent poles to call the shots, it’s hard to imagine a screenwriter/director-driven age of ideas, artistic control and bold cinema ever dominating the American film world again. That said, “Zodiac” not only feels like a movie from that golden era of 70’s film but looks it, too. The pacing, color palette, unreliable protagonists and uncompromised finish make it seem like a movie that could have played in theaters while the Zodiac killer monopolized the local headlines. 2007 was the year that gave us “No Country For Old Men,” “Youth Without Youth,” and “The Assassination of Jesse James by the Coward Robert Ford.” They’re all masterpieces that would have been at home sharing the bill with “The Godfather,” “Dog Day Afternoon” and “The Last Picture Show.” Alongside those recent works is Fincher’s “Zodiac,” the best film of its year and, to date, the crowning achievement of Fincher’s already remarkable career.

'Zodiac' has no comments