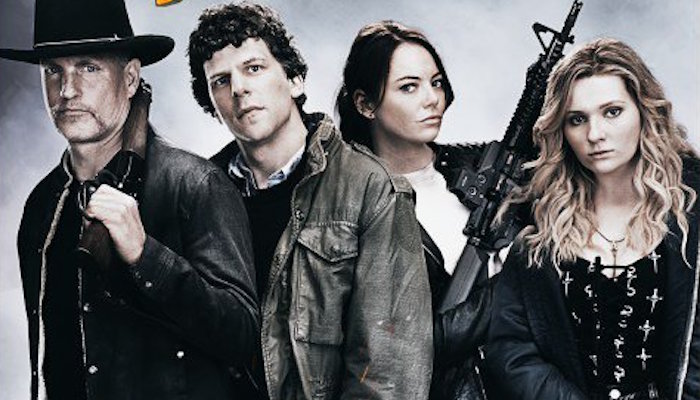 The last time we were in “Zombieland,” it was a decade ago and our group of heroes had survived a massive zombie attack in an amusement park. Now, the gun-toting, Twinkie-loving Tallahassee (played by Woody Harrelson), brainy and neurotic Columbus (played by Jesse Eisenberg), a stern Wichita (played by Emma Stone) and fed-up Little Rock (played by Abigail Breslin) are living in an abandoned White house. Days of goofing around and occasionally leaving the property are interrupted by gory zombie attacks, which are interjected with the many rules Columbus has established on how to survive assaults by the un-dead.

For a movie so caught up in rules, here’s another one to consider- never make a sequel to a comedy classic. There are too many examples to give but recent offenders include “Zoolander 2,” “Anchorman 2” and “Dumb and Dumber To,” which all looked like sure things and wish fulfillment second chapters that we couldn’t wait to see…until we saw them once and never again. Thankfully, the return to “Zombieland” doesn’t hit rock bottom, like “Caddyshack II,” my pick for the all-time worst sequel ever made. However, it can’t even reach the meager heights of passable, goodwill-fueled follow-ups like “Ghostbusters II” or “Beverly Hills Cop II.” If anything, this is a fun companion piece to the first movie, a nice revisit with some characters I enjoyed the first time and offers a few memorable bits, and that’s it.

The action sequences have a sharpness that the comedy never does. While its thoroughly amusing, little of this is laugh-out-loud hilarious. There’s a laid back, self-satisfaction to this that undermines any tension. Despite shots of the outside world looking like illustrations from Cormac McCarthy’s “The Road,” a sense of grim desperation and the fear of being attacked while isolated (factors that made the original exciting) barely register.

A running subplot in the first “Zombieland” focused on Tallahassee’s relationship with a puppy- this portion, with its touching big reveal, provided the heart of the movie. There’s nothing here that comes close or even tries to. In fact, if the sequel has one very big problem holding it back, it’s this- very little seems at stake.

Returning director and co-screenwriter Ruben Fleischer hit it big with “Zombieland” in 2009, which is as durable as it is funny. Fleischer’s subsequent works include the forgettable “30 Minutes or Less,” the generic and limp “Gangster Squad” and last year’s dreadful (and bizarrely popular) “Venom.” What should have been a return to form feels like a chance for an easy break while the script for “Venom 2” is prepared.

The biggest ace this has up its sleeve is a supporting role for the wonderful Zoey Deutch, playing Madison, a bubble-headed blonde who joins the group early on; Deutch, the daughter of Lea Thompson, has stolen a handful of movies already (including “Flower” and “Everybody Wants Some!!”) and can easily add this one to her list. She is the comic firecracker this movie needed in every scene.

Emma Stone no longer looks credible in this- watching her blast a gun at zombies and flirt with Eisenberg, it made me wonder if she was thinking about her Oscar and the next time she’d make a movie with Ryan Gosling. Likewise, as hard as he is visibly working in this, Eisenberg’s schtick is getting old and overly familiar. A mid-movie joke where a few characters meet a “double” falls flat in the casting- surely, if you’re going to pair Eisenberg with his “other self”, you have to cast Michael Cera (who, at one point, even I would confuse with Eisenberg).

It’s always nice to see Rosario Dawson though, as with most movies she appears, her performance is so much stronger than the role itself. The clear MVP (aside from Deutch) is Harrelson, who’s terrific. Harrelson never hits a false note and gives this as good as he’s got. Unfortunately, the story, which stops and starts and involves tension-free road trips, never takes off and doesn’t amount to much when it’s over. “Zombieland: Double Tap” isn’t bad but it’s not essential, either.

I won’t describe it but, as advertised, Bill Murray once again makes a cameo appearance as himself; the scene has the same problem as the rest of the film- its initially charming but plays out in an obvious way and isn’t as funny as it clearly thinks it is. Murray was wise enough to avoid “Caddyshack II” and, considering what he’s given to work with, he should have passed on this one, too.

'Zombieland: Double Tap' has no comments