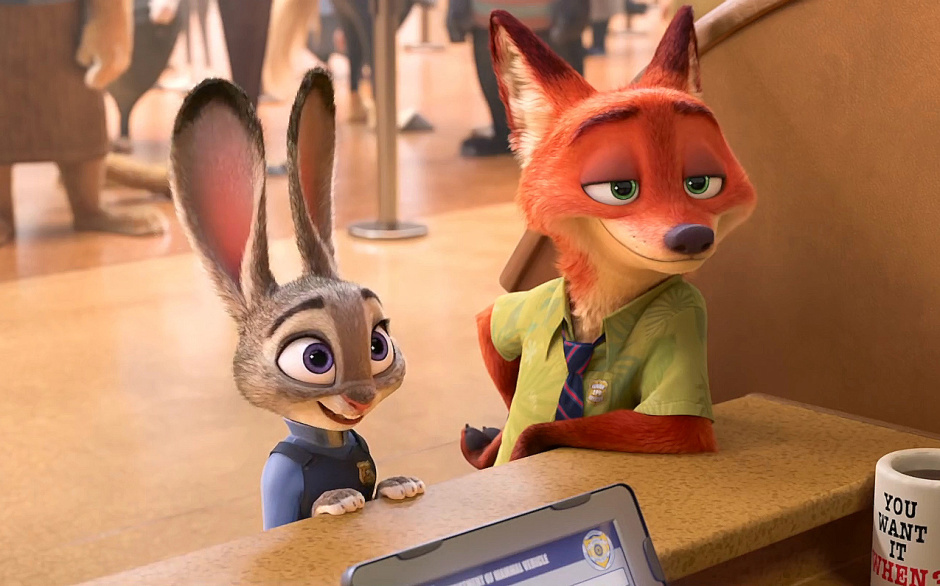 Before I write about Disney’s new CGI animated comedy, let me briefly address a film that came out thirty years ago, In 1986, the first official Marvel comic book movie adaptation was “Howard The Duck,” an infamous, George Lucas-produced mega-bomb. It was, at the time, the most expensive film ever made and a giant step back for movies based on comic books (as well as talking ducks who smoke cigars). I’m bringing the movie up because the first five minutes take place on Duck World, a planet in which ducks speak English, wear clothing and live in a world exactly like ours, only everything is duck-themed. Despite the abundance of duck puns, the opening sequence is dazzling, as it presents a unique planet to spend the entire running time. Unfortunately, after an elaborate introduction, the movie leaves Duck World. The title character is literally sucked out of his easy chair, sent hurling through the universe and crash lands on Earth. The entire movie crash lands with him. “Zootopia,” on the other hand, knows what it has and focuses both on its setting and characters in a smart, satisfying way.

We meet a bunny named Hopps (delightfully voiced by Ginnifer Goodwin) who wants to be a police officer when she grows up. In the film’s animals-as-people setting, Hopps grows up, graduates from the police academy and finds herself an overly earnest, in-over-her-head cop in crazy Zootopia. Her unlikely friendship with a con artist fox (voiced perfectly by Jason Bateman) gives her an edge in solving a missing persons case.

The world of “Zootopia” can’t be scrutinized too closely. While we’re offered an origin story, presented cleverly as a children’s school play, I sometimes wondered how plausible the film’s setting is. Instead of getting caught up in make-believe logic, my reaction to “Zootopia” was emotional. I wasn’t expecting it to move me like it did.

This is a weird movie, both in the chances it takes and the success rate of those odd choices. Here is a buddy comedy, a children’s film, a whodunit, a social commentary, an action movie and a satire of movie tropes. Its “Animal Farm” crossed with “48 HRS,” with a point to make about not allowing our fear to taint our worldview. All of these ingredients work.

There are out-of-left field surprises, like a hilarious, extended parody of a classic, R-rated movie that I won’t spoil. I also found myself crying, not because of cheap manipulation, but because the story has some genuinely heartbreaking scenes. Some of this will be too scary for small children. Older kids and their parents, on the other hand, will likely be delighted. Seriously, when was the last time you saw a non-Pixar children’s film that you’d call engrossing?

The inevitable pop culture references are scant and don’t feel intrusive. There’s a pop star named Gazelle, voiced by Shakira, who doesn’t upstage the story and actually seems to belong in this world. This movie has a lot on its mind but doesn’t allow discussion-worthy topics to overwhelm its involving story, which is character-driven and manages to be funny and wrenching in even doses.

I found the “Happy Feet” movies to be obnoxious, both in their sugar-fueled hipness and their too on-the-nose, overly obvious approach at injecting messages into a children’s film. Lessons and morals, particularly when dealing with topics such as bullying, prejudice and accepting others despite our differences, are vital, timely  and important topics to inject into family films. Yet, they need to be presented in an intelligent, impactful and organic way. “Zootopia” manages the feat of feeling very of-the-moment and piercing in its ideas of accepting others, yet never comes across as preachy, overly PC or forced. Walt Disney would himself would have been proud of this one.